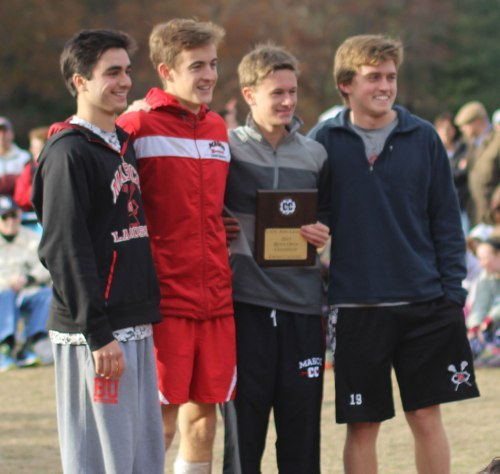 Maddie Quigley (Triton) and Joe Molvar (Newburyport) were the top finishers in each division.

The ME girls edged arch-rival Hamilton-Wenham in several head-to-head races within the race to get the title, 40-50. During the regular season HW got by ME by a one slim point to keep their dual-meet streak (129 straight) alive.

The Masco boys had too much depth for the rest of the CAL field. Newburyport took the top two spots (Joe Molvar and Jack Carleo) but the Chieftains still won, 60-73. Masco’s Daniel Cosgrove finished third.

Senior Maddie Quigley was behind fast-starting Emily DeMarco (Ipswich) for part of the race but had a good lead over Eve Feuerbach (ME) at the finish. Maddie finished 7th in 2014.

Joe Molvar near the finish

Senior Joe Molvar trailed teammate Jack Carleo for part of the boys’ race but also ended up with a commanding lead over his Clippers’ teammate at the end.

An important last-second rally by ME’s Holly Fossa got her past HW’s Olivia Horgan and into sixth place. 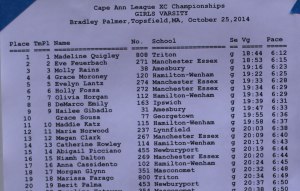 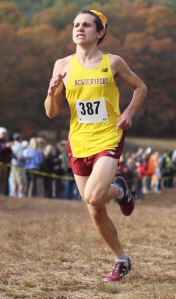 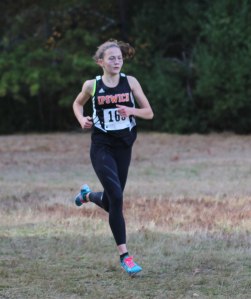 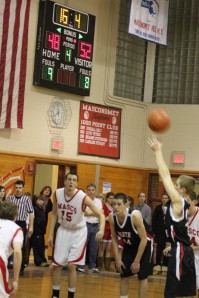 (Boxford) Plenty of denial defense was on display as North Andover defeated Masconomet, 55-48, at Masco on Friday night in Cape Ann League play.

A full house was on hand, partly to honor Masco’s three seniors, and partly to see if their Chieftains could grab a share (with Wilmington) of the CAL Division 1 title.  Well, one out of two, ain’t bad!

With the victory, North Andover (15-4) will have a chance to be co-champs with Wilmington if they can get by Hamilton-Wenham in a rescheduled game at home on Monday. HW coach Doug Hoak was in the house for the Masco/North Andover contest.

Derek Collins (16 points) hit a couple of three’s early in the 4th quarter to give the Knights a 47-41 lead with 4:45 to go and Masco (11-7) was kept at least one possession away thereafter.

An Adam Bramanti (13 points) layup with seventeen seconds left narrowed things to 51-48 but two free throws by Colby Smith gave the Knights the cushion they needed for the win. 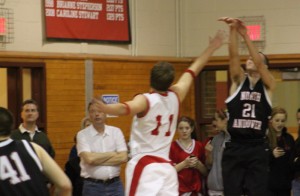 Derek Collins hits a three over his “shadow” Ben Panunzio.

It worked against Zach as he was limited to seven points.  Derek, however, reached his average and hit from long range three times.  One of those 3’s in the 4th quarter was a real backbreaker (for Masco).  Derek ended up forcing a shot from closer to midcourt than the top of the key that went in as the shot-clock buzzer went off.

Adam Bramanti averages twenty but was held to thirteen.  He was shadowed by an assortment of Knights. NA did not allow him to use screens to get open by switching every time one was set for him. 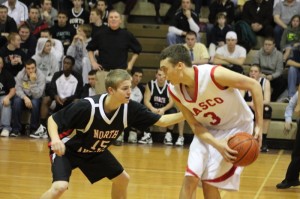 Adam got off twenty shots (made five) but the looks he had against Hamilton-Wenham (scoring 28 points) were not available versus North Andover.

There were nine lead changes in the first half with NA getting the last one with a run of six straight points (Zach, Derek, and James Warden two points each) as the Knights closed out the first half in front, 30-25.

The Knights never trailed in the second half.  The Chieftains did tie the score (38-38) on a layup by Alex Brown (11 points) to start the final period.

Masco is on a 4-game losing streak and has two non-league games (Revere and Malden Catholic) at home next week left on their regular season schedule.

NA had lost two in a row before defeating Masco.  The Knights also won over Masco in December. They have Hamilton-Wenham left.

(West Newbury) I didn’t see Pentucket’s 61-60 squeaker over Masconomet on December 29th at Masco.  In fact, I didn’t see all of this afternoon’s rematch in which Pentucket was a 50-33 winner.

Missing some of today’s girls’ game was my mistake – I believed what I read in the Newburyport Daily News.  (Masco at Pentucket 3PM)

Anyhow, I missed the first quarter and only scripted the second half.  I’ll rely on Mike Grenier’s game story from the Salem News for what I missed.

Masco (7-3) put up 10 points in the last 4 ½ minutes of the game but struggled mightily to make shots before that.  The tall, pesky Pentucket defense was part of their problem.  The rest was just an overall inability to make shots.  Credit the Sachem defense but what about Masco’s 5-for-17 from the foul line with a number of those being one-and-one’s.

The Sachems (7-1) hadn’t played in nine days (loss to North Andover) and appeared to have all sorts of defensive energy stored up.  Pentucket coach John McNamara had those practice days to bring his normally effective defense back to its normally effective self.  What could be tougher than facing a well-rested, heavily-drilled,  Pentucket pressure defense on their court?

Masco’s Brooke Stewart had 24 points during the last meeting but this time had few openings and no easy shots and ended up with thirteen points.

Brooke (6’ junior) had plenty of company everywhere she went.  Tess Nogueira gave her the same denial coverage I saw her effectively put on Newburyport’s Beth Castantini.  Brooke had nothing but low percentage shots available even when she actually got the ball.  In this game, she didn’t have teammates to share the scoring load and loosen up the defense she faced.

I looked at Masco playing man-to-man defense for the 3 quarters I watched.  I read that in the 61-60 game Pentucket struggled against the Masco zone defense.   That 16-9 start in this one may have forced Masco away from zone defenses.

The Sachems have many players capable of getting to the basket against man-to-man defenses.  In a game the home team won by seventeen points, you can only imagine what the separation might have been if Pentucket had shot better than 19% (7-for-36) in the second half.

A stat comparison shows Leigh McNamara, Vicky Cahill, and Sarah Higgins totally 35 points in the one-point, first game win.  Versus Masco a second time, those three total eleven points and Pentucket wins by seventeen.  Point?  Nicole Viselli will usually score the most points but after that the Sachem scoring weapons are varied and numerous.

Every team knows that Pentucket will attack defensively and tirelessly.  Court vision and accurate passes are the two solutions but the Sachems size and hustle make those two a tough task. 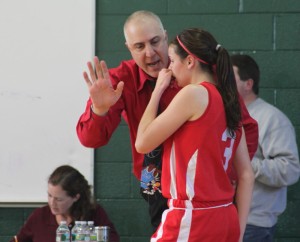 Masco coach Bob Romeo chats with Chelsea Nason in the second half.

Pentucket wasn’t a whole lot better with the ball either.  They did get six points but they too, during this same six minute segment, had six turnovers and missed nine shots.

Maybe the sun was in their eyes.  It poured in for the entire game, making one end difficult to defend on and the other one hard to see the basket or anything else.  I’m guessing that the folks who scheduled an afternoon game at Pentucket failed to consider the sun factor.

Two of the top scorers in the area (Brooke Stewart and Nicole Viselli) were in the game.  Nicole led all scorers with seventeen points. 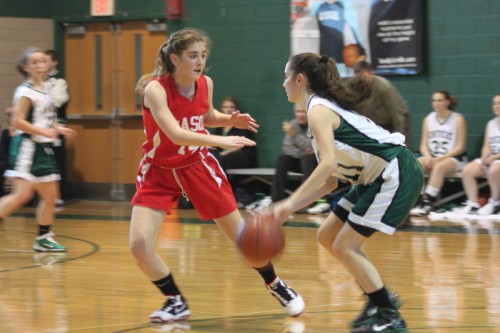 I once again met the gentleman who misunderstood what I do and embarrassed himself (and me) at Newburyport. He came over to talk to someone near me.  When I got a chance I asked him if he was “scouting.”  He looked a bit stunned and left.

(I collect my own stats and usually check them with newspaper coverage, take my own pictures, write my own captions and draw my own conclusions.  Any mistakes I make in doing so are unintentional.) 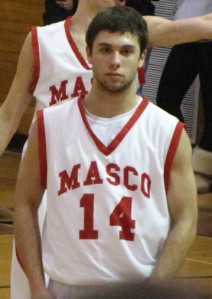 (Boxford)  Masconomet (18-3) scored all the points in the last two minutes and that was the margin of victory (55-48) versus Arlington (10-11) in the opening round of the Division 2 North played at Masconomet on Wednesday night.

Masco (#2 seed) moves on to play Salem at home on Sunday (February 28th) at 4PM.  The Salem team took in the Masco/Arlington game.

The Chieftains put together a 21-5 run that started late in the first quarter into the second quarter that turned a 13-11 AHS advantage into a 32-18 deficit with 1 ½ left in the second quarter.  The taller Chieftains hit one trey but everything else came from layups, converted rebounds, and free throws.  Adam Bramanti (17 points) put up eight points and Collin Burke (14 points) seven points during this surge.

The Ponders, however, scored the last six points of the half to close to 32-24.

Arlington (#15 seed) moved its man-to-man defense to fullcourt and changed the pace away from Masco’s comfort zone.  The Chieftains had fourteen turnovers in the second half.  Four of those giveaways led to AHS putting a 12-2 run against Masco to tie things at 36-36 with 3 ½ minutes left in the third quarter.  Miles Powell (16 points) contributed old and new 3-point plays for the visitors.

The 4th quarter saw Masco build a 48-42 lead with 3 ½ left in the game only to have AHS use a Miles Powell jumper, a Greg Moulton (15 points) trey, and a Brandon Castro free throw to knot things at 48 with two minutes left.

Both teams swapped turnovers before Masco broke out of backcourt pressure and Chris Splinter drove in on the right under significant defense and made a layup with 1 ½ left.

Now down two (50-48) AHS missed a lead-taking three (Miles Powell) and then both team swapped turnovers.  With 31 seconds left Masco struggled to get the ball inbounds and burned two timeouts to prevent a turnover.  The careful approach paid off because when Masco did get the ball into play Jake London (9 points) was fouled and made both shots.  AHS missed a couple of shots before Chris Splinter (9 points) made a free throw.  Another missed three and it was Adam Bramanti’s chance at free throws.  He made two with two seconds left and Masco reached the 55-48 final score.

The Ponders put up three’s without conscience and fortunately for Masco connected on just 4-of-23 attempts.

Masco’s 21 turnovers should give teams ahead the green light on bringing pressure.  Many of the miscues were on ill-advised passes.

On the other hand, the Chieftains zone defense forced AHS into a long-range, low percentage offense and the Ponders couldn’t make enough shots to force Masco away from it.

( All stats are unofficial. )