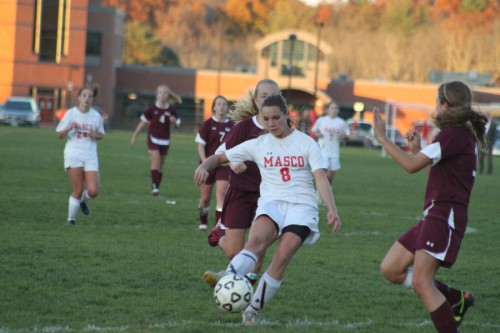 Lexi Sheehan of Masco puts her foot into the game-winner.

(Topsfield) Neither team needed the game to qualify for the state tournament but visiting Newburyport was playing for a share of the Cape Ann League Division 1 title.

Masconomet (11-3-1) played the spoiler role defeating the Clippers, 2-1, on a sunny Thursday afternoon in their final home game of the regular season.

Newburyport (12-2-2) entered the game sharing the top spot with Hamilton-Wenham.  But the Newburyport loss combined with HW’s win over Pentucket (5-0) gave the CAL D1 title to the Generals with a 13-1-2 record.

Surprisingly, this game went from a lengthy defensive struggle to a shootout in the final six minutes.

With six minutes left, Claudia Marsh set up teammate Lexi Sheehan for a header for Masco’s first goal. Four minutes later Lexi Sheehan was back for a second goal after dribbling down the middle and blasting a shot past NHS goalie Lilly Donovan to her left.

Newburyport came right back with a top-shelf goal by Jaycie Triantafillou a minute later, in the last minute of the game, but the Clippers didn‘t have time to threaten to tie the game.

first half scramble in Masconomet end

Masco and Newburyport had played to a 1-1 tie on September 25th and after watching sixty minutes of scoreless play in this game I suspected that a 0-0 tie was a strong possibility.

Both teams had returning CAL award-winners on defense.  No question that Paige Pratt (Masco) and Aly Leahy (Newburyport) play the last-defender position extremely well.  So there were shots in the first sixty minutes but mostly long range tries.

Katie Gorenflo did get in for a close one seventeen minutes into the second half but Masco goalie Nancy Palermo was able to smother the attempt.

The one that will haunt the Clippers, when they recall this game, was a shot by Jaycie Triandofilou twenty-five minutes into the second half.  Jaycie struck a hard shot that hit the crossbar and went straight down in front.  Masco was somehow able to clear the rebound and keep the visitors off the board.

The key to the Chieftains first goal was the sideline run by senior Claudia Marsh.  She was able to get space and send a hard shot toward the front of the net.  NHS goalie Lilly Donovan was set up close to the goal-line protecting for a shot directly on net.  When the shot/pass was sent out away from the goal-line, Claudia’s teammate (Lexi Sheehan) was able to move in and head it past Lilly before she could get out to catch it.

Now down by a goal and only six minutes left, the Clippers quickly put a couple of shots on MHS goalie Nancy Palermo moving more players into the offensive end.

However, when the Chieftains were able to get control, they set out on a long run toward the NHS goal.  Lexi Sheehan covered a lot of ground down the middle and was able to get away a clear shot from in close for the game winner with two minutes left.

Jaycie came back with a quick answer but it was too little too late.

Both Masco and Newburyport are tireless.  There were many long runs in this game. 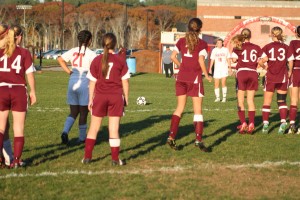 One aspect that needs work on both teams are direct kicks.  There were at least sixteen taken, by my unofficial count, during the game and not one of them turned into any kind of threat.  Way too many of them missed the goal entirely and some of the kicks were taken from very close range.  Maybe I was spoiled by watching Hannah Martin kick them in recent years for Newburyport.

Missing for Newburyport (as she has been all season) was Carly Brand.  The junior was injured in March and has just been cleared to practice.  She was on the Clipper bench for this one.

The last time I was at the Masco soccer field (last year) the Chieftain boys defeated Lincoln-Sudbury in a tournament shootout prompting one of the most dangerous student stampedes I’ve seen.

There were three soccer games going on at the same time.  I saw a few JV soccer balls escape onto the varsity field but no confusion resulted.

There was a scoreboard at Masco………but it didn’t work.

The sun was tough down one end for Lilly Donovan in the first half and for Nancy Palermo for part of the second half.  The sun, however, was not a factor in any of the goals.

(All of the pictures enlarge considerably if you click on them.)

Masco and Georgetown Play to 1-1 Tie in Girls Soccer

Nicoline Holland (17) gets a hug from assisting teammate Ashley Mueskes.

(Georgetown) Two good area girls soccer teams played to a 1-1 tie, as Georgetown (3-0-3) rallied five minutes after a Masconomet (4-3-2) goal late in the second half to net one of their own.

The Monday afternoon game was moved just before game time from Georgetown’s lower field to its upper soccer field.  There was too much water on the lower field, according to the officials.

On a cloudy afternoon, Masco had the most shots (17) and the most corner kicks (5) but the Royals had goalkeeper Jamie Block as the final defender.  The talented junior turned away several dangerous Chieftain attempts.  She also put good distance on goal kicks and punts to give her teammates a chance to regroup.

The Royals had defeated Masco, 2-1, in September at Masco in a non-league game.  Today’s tie counted in the Cape Ann League’s standings.

Both goals in this game were scored in its last ten minutes.  The visitor’s goals came off a Olivia Buonopane’s corner kick from the right corner.  Keeper Jamie Block moved toward the near post as the shot was in the air only to have it sail over her head into a crowd of players behind her.  Somehow, Chieftain Mia Farnham directed the ball into the net with ten minutes left in the game.

I suspected that Masco might now go into a defensive shell but they didn’t.  The Royals pressed hard into the Masco end and got one of their two corner kicks. From it, Kelly Chickering drilled a shot from the left that just barely sailed over the top of the Masco net.

Undaunted the Royals were back threatening again two minutes later.  Kristin Hogan passed the ball into the middle to Ashley Mueskes and the senior co-captain gave her teammate Nicoline Holland as nice a feed as you’ll ever see.  Nicoline (90+ career goals) took full advantage of the open side and tied the score with five minutes to go.

Ashley Mueskes sends a pass between Alexa Ina (1) and Leah Connerty (10) that set Nicoline Holland up for the tying goal.

The memorable moment the rest of the way was Ashley Mueskes hobbling off in the last minute with a leg injury.

Next game for the Chieftains is at Triton on Wednesday (October 5th) at 3:45PM

Georgetown travels to North Reading to face the Hornets at 7PM on Wednesday (October 5th) night.

The best player on the field?  Kelly Chickering.  Undersized but drawn to the ball in the defensive end.  Clever and speedy enough to end opponent’s scoring opportunities.

(I collect my own stats and take my own pictures.  I am determined to be fair and accurate.)

The pictures will enlarge to normal size if they’re clicked on.

Masco goalie Courtney Bouchard hits the ball out with Kristin Hogan (20) and Katie DiMaio (13) looking for a rebound.

Masco goalie Courtney Bouchard makes the save as Nicoline Holland (17) and Alexa Ina (1) go by.