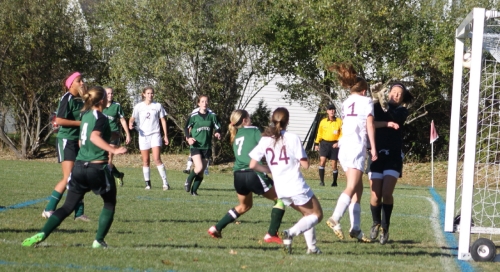 Carly Brand (11) heads the ball into the net past Pentucket goalie Sam Bomba.

Leigh McNamara had the Pentucket goal.

(Newburyport) The Newburyport Clippers defeated Pentucket, 2-1, in the First Round of the Division 2 North girls soccer tournament on Sunday afternoon at sunny Cherry Hill Field.

Carly Brand’s head-in on Hannah Martin’s direct kick, three minutes into the second half, proved to be the game winner.

The Sachems (7-7-5) figured to be tired (they had beaten North Reading on the road the day before) and overmatched by Newburyport (the Clippers had defeated them 3-0 in October).  Someone forgot to tell Pentucket about this.

Down 2-0 early in the second half, the Sachems finally got a goal 32:20 into the half as Leigh McNamara was on the scoring end of a pass from Maddy Torissi in close to NHS goalie Lilly McNamara.

Unfortunately, for Pentucket they weren’t able to muster a serious threat thereafter.  They will probably wonder for some time about the disallowed goal (offsides) that was headed in at the twenty-minute mark.  Put that goal on the board with the Leigh McNamara goal and who knows what would have happened down the stretch. 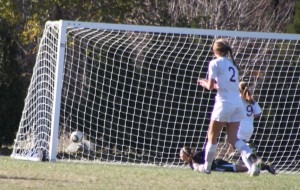 Julia Kipp (2) and Jaycie Triandafilou (19) watch the shot of Liza Twomey go into the net past the PHS goalie.

Liza Twomey notched the Clippers’ first goal thirty-five minutes into the first.  Two things about the Newburyport forwards are that they are fast and persistent.  In this case it was “fast” that did the trick as Liza started about midfield with the ball and raced by the Sachem defenders for an open shot from the right on PHS goalie Sam Bomba.

Newburyport’s second goal featured probably the most dangerous player in the Cape Ann League taking direct kicks – Hannah Martin.  She can hit the ball hard and she’s usually going to have the ball be close to the net.  This time the direct kick came from just up from the corner kick flag to the right of the goal.  Carly broke for the far corner just as the ball was kicked and was in perfect position to head Hannah’s kick past Sam Bomba.

Once Pentucket fell behind they attempted to press the attack.  The Clippers ended up with some excellent scoring opportunities (Kerry Johnson & Jaycie Triandafilou) but defender Sarah Higgins and goalie Sam Bomba denied a third goal.

The weather was in the mid-50s with some wind.  The crowd was sizable although it was hard to tell when the crowd is relegated to one side.

This was only the second time I have been kept away from the goal line.  I probably would have missed Carly’s head-in if I had been located where I wanted to be.

Haley DesRosiers gets a yellow card.

Haley DesRosiers surprised me in the second half by giving Meghan Corbett a two-hander that dropped the Clipper captain to the ground.  Less surprising was the yellow card Haley got and the escort by the official to the sideline.

PHS coach Greg Scruton got in the way of a ball going out of bounds and put on a bit of a juggling show.  I’m told he was quite a player at Gordon College.

(I take my own pictures and collect my own information.  The mistakes are mine.)  Click on any of the pictures to enlarge them to normal size.