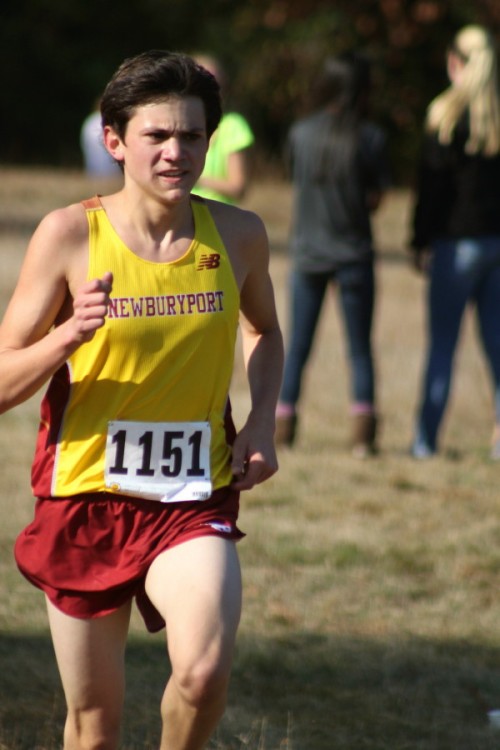 The Clippers had plenty of reason to fear the challenge of their arch-rival Masconomet.  The Chieftains had only lost by five points (25-30) in a CAL meet at the same location on October 15th.

This time, however, the spread was wider (37-46) for Newburyport.

Nick (15:44) had a nineteen second lead at the finish line over Matt Gillis (16:03) of Hamilton-Wenham.  That’s a significant spread in the 3.1 mile Bradley Palmer course.

Nick led from the very early going.  There are state meets ahead and it will be interesting to see how he does against some of the state’s best.

Newburyport won Division 5 last year and Masco coach Pat Mahoney was quoted saying, “that they should win it again this year.”

A key performer for the victorious Clippers was senior Max Vye.  I saw Max win the JV meet last year.  In today’s meet Max finished 19th.  However, he was Newburyport’s fifth finisher, ahead of two Masco runners and that made a difference in the final point totals.

(Last year I arrived at this event at 10AM because that was when it was scheduled to start.  That enabled me to watch both the JVs races.  This year I figured I’d skip those races and get there at 11AM for the two varsity races.  Silly me!  The varsity races did start at 10AM.  I’ll assume the JV events started at 9AM.  Who knows what might happen next year!)

This is a look at the lead runners before they went by the starting line for the second time and some of the early finishers: