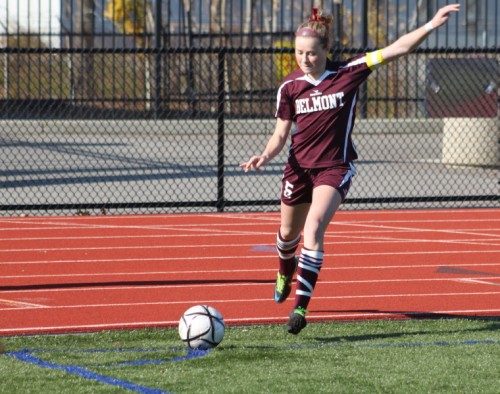 (Lynn) It was sweet revenge for the Belmont Marauders girls soccer team.

Just over a year ago, Belmont was knocked out in the Division 2 North quarterfinals by Newburyport at Newburyport.

This time it was the Marauders getting a 1-0 overtime win over the Clippers to move on to the D2 North finals on Monday afternoon (3PM) back at Manning Field in Lynn.

Senior Olivia Lyons kicked in the winner late in the first overtime off of a well-placed corner kick by Julia Russo.  Julia’s corner kick and about seven or eight players ended up at the same spot at the same time. The heavy traffic gave  Clipper goalie Lilly Donovan no chance to get to the ball.

The Saturday morning game featured sunny skies and quite a few chances for either team to score.  Sometimes in games where goals aren’t scored for all of regulation, the play is in the middle of the field.  Not this one.  There were frequent “ooh’s” and “ah’s” as either great last-ditch defense or a late misconnection kept both nets clean through 80+ minutes.

#4 seed Newburyport (15-3-2) will lose two seniors, Katie Gorenflo and Jackie Krusemark.  Both girls were 2012 Cape Ann League All-Stars.  However, there is plenty of Clipper talent coming back, including Carly Brand.  Carly was injured in the off-season and didn’t play all season.  She was one of the top players in the CAL as a sophomore in 2011. 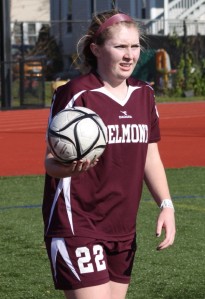 One thing I have noticed about tournament play is that by-and-large the referees allow more physical contact.  That seemed to help Belmont.  They were much more aggressive.

The key player in the Belmont win was Julia Russo.  The senior midfielder was very much the dominating player in the middle of the field.  Her main contribution, however, was on direct kicks and corner kicks.  Julia often kicked the ball with force and put it in an area where scoring chances might evolve.  That was indeed what happened in the overtime goal.

The Clippers could only wish that midfielder Hannah Martin hadn’t graduated in June.  Hannah had the same knack, as Julia, to make every direct kick dangerous.  Hannah, in fact, scored on a direct kick in the Clippers 2-1 win over Belmont on November 8th of 2011 in the quarterfinals game.

Gabby Joyal picked up a yellow card in overtime.

Aly Leahy went out with an injury with nine minutes left in regulation but returned five minutes later after getting her ankle wrapped.

The 10AM start didn’t discourage the public address announcer from reminding us that pizza and nachos were available at the concession stand.  Doughnuts and coffee might have had a better chance!

I did appreciate the PA announcer telling who the goal scorer was in overtime.  With the number of players milling around in front it would have been anyone’s guess otherwise.

(The pictures above and below enlarge if you click on them.)

Jaycie Triandafilou looks for a shot in front

traffic in the Newburyport end

Alexandra Cellucci (15) and Amy Sullivan close on a ball