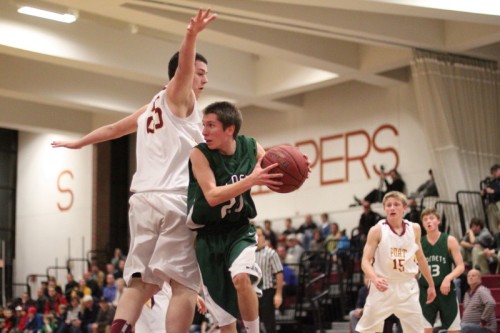 Liam Aldrich (10 points) looks for someone to pass to 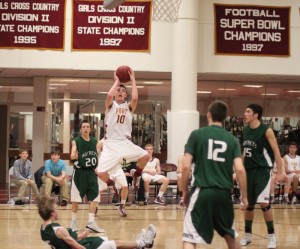 (Newburyport) Newburyport had Manchester-Essex on the ropes early in the final quarter but went verrrrry cold over the last six minutes and lost to the Hornets, 54-38, on Friday night in Cape Ann League action.

But over the last six minutes Newburyport had only one basket (Dillon Guthro layup from Ian Michaels) and that enabled the visitors to pad their lead to a comfortable sixteen by game’s end. 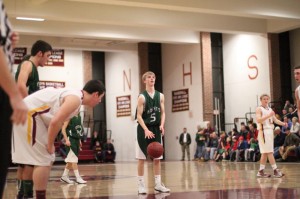 Newburyport, which had won five of their last six, was ahead for most of the first quarter, until a three by Petey Morton (8 points) gave ME their first lead, 16-14, in the last thirty seconds of that quarter.  The Hornets stayed in front the rest of the game.

Manchester-Essex, which has now won five of their last six games, boosted their advantage to seven in the second quarter and thirteen in the third quarter before the Clippers made their run to within six points in the final quarter.

Senior Max Nesbit nailed four 3’s in the game and saw a lot more open looks than a player with his shooting reputation should have had.

The Clippers continue to play without ball handler/shooter Co-Captain Colby Morris.  Poor shooting was certainly an issue for Newburyport versus ME but just as significant was shaky ball management.  By my unofficial count, Newburyport had eighteen turnovers including nine in the second quarter.

Clipper Dillon Guthro (8 points) was injured in the first quarter and returned in the second quarter with a noticeable limp.

A good matchup was between point guards Adam Traxler and Liam Aldrich.  Liam showed a fancy move down the lane in the third quarter that raised some ooh’s and ah’s from the crowd.

Both ME and Newburyport have lost to undefeated North Reading.

The Hornets were 19-3 last season and 52-14 over the last three seasons.  Coach Bryan Shields is a first-year coach.  This year’s Hornets started with three straight losses but have done very well since. 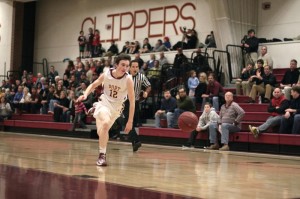 I was told that in their last game at Ipswich the Clippers had an 11-7 lead at halftime.

The Hornets will host Triton on Monday in their next game.

The Clippers travel to Rockport on Tuesday for their next action.