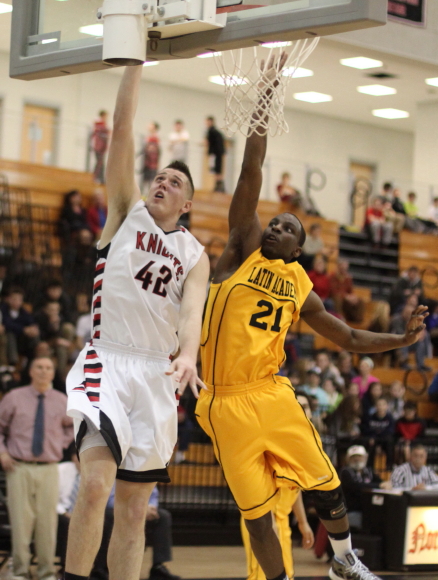 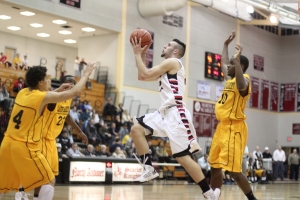 The Scarlet Knights will host Concord-Carlisle on Saturday at 4PM.

The Knights, however, settled the outcome of the game in the next 8 ½ minutes, stretching into the third period, by putting a, 16-3, segment together.

That collection of productive offense put NA ahead, 37-21, early in the third period.  The Knights lead would expand to 44-25 midway through the third quarter and they coasted in from there. 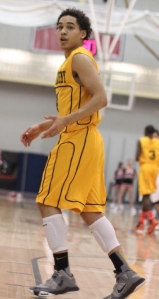 The undersized Dragons spent most of the night on the perimeter with an occasional one-on-one drive to the hoop.  What killed the visitors from Boston was connecting only once (Edwin Porro) from long range.  I’m guessing they attempted close to twenty long ones.

Down the other end, North Andover (17-4) ran organized offense and turned up high percentage shots all game long.  6-6 Isaiah Nelson (22 points) and 6-5 Chris Bardwell (14 points) feasted in close against a team whose tallest player (Alex Guerrier) was 6-2.

During the decisive 16-3 run, Isaiah had three layups and a converted rebound, Chris spun loose twice in close for layups, and Derek Collins (10 points) hit jump shots off the foul line.

When a good team like North Andover is allowed to have a nightful of high percentage shots by its key players, the other team is in trouble.

Edwin Porro had eight of his fifteen points in the first nine minutes and enabled the Dragons to only trail by three early in the second quarter.

Thereafter, the Boston City League team went cold from the outside and their deficit increased by the minute because of their defensive struggles. 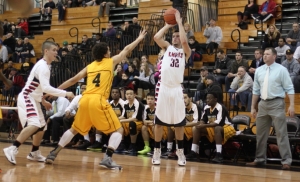 It intrigued me to watch Latin Academy position their players around the 3-point line and never flash anyone in from the weak-side.  They were content to fire three’s or try and drive past their defender to the basket.  Offensive rebounds were scarce out of such an offensive strategy.  They needed to make three’s and were unable to in this game.

The lack of consistent scoring kept the Dragons from applying well-organized full-court pressure.  The Knights had only six turnovers (by my count) during the first three quarters.

Latin Academy lost the services of DeVaughn Riley with five minutes left in the 2nd quarter when he picked up his third foul and was benched.  DeVaughn missed part of the season with a football injury. 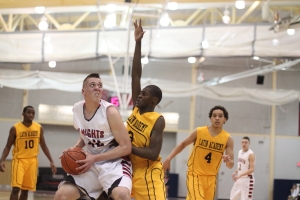 Isaiah Nelson collected eleven points in the third quarter including a three.  He will be attending St. Anselm’s next season.

Brendan Miller (10 points) had six in the first quarter.

North Andover’s four losses this season were to: Andover (twice), Westford Academy, and Central Catholic.  The Knights won’t be facing any of those Division 1 teams in the tournament.

I was very impressed with the NA pep band.  They did a nice job on the National Anthem.  They also kept playing long after the game ended………..they just enjoyed playing!

Chris Bardwell (14 points) gets off a shot

Spiderman was in the house