Malik James (25 points) tries to get between two Salem defenders

(Salem) Chris Dunston reached 1000 points but that was the only good news Salem got out of their, 82-61, loss to Brighton in the Division 2 North quarterfinals on Friday night.

The Brighton Bengals (17-6) face the winner of undefeated Melrose versus New Mission.  In February, Brighton defeated New Mission to win their first ever Boston city championship.

Very misleading final score.  The first half saw seven lead changes, and an eleven-point (28-17) Salem lead early in the second quarter.  Brighton was only ahead by three (42-39) at the half.

With that paragraph of information you can now imagine what a disaster the second half was for the Witches.  The home team put their trust in the perimeter game and paid for it when serious cold shooting set in. 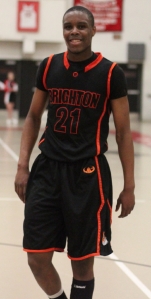 The visitors ran eight straight to start the second half and suddenly after three minutes Salem trailed by double figures (50-39).  Nick Simpson (29 points) had an old-fashioned three and a tip in while Daivon Edwards (17 points) drained a three in this surge.

But the Bengals had all the points (six) during the rest of the quarter and they ended up ahead, 61-46.  Malik James (25 points) and Nick Simpson had layups and Mark Mojica took a Salem turnover in for two.

The Witches did not have the accurate shooting to respond in the fourth quarter.  When Chris Dunston (13 points) went out with his 5th foul with 4 ½ minutes left, Salem was down, 68-54, and now minus their best shooter.

The Witches had six 3’s including two during their 18-7 segment in the first half when they turned a 4-4 tie into a 28-17 advantage.  Seven different players contributed points.  It looked like a long night in the making for Brighton. 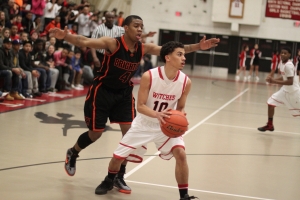 Marvin Baez (9 points) with Daivon Edwards (17 points) behind him

But the Bengals trio of shot makers turned things their way over the next three minutes by putting a streak of fourteen unanswered points together.  Nick had a three, two free throws, and a layup off a Salem miscue.  Malik canned a jumper and a layup down the lane.  Daivon connected on one of his five 3’s.  This collect of Brighton scoring gave them a 31-28 lead.  They would still have that three-point lead (42-39) at halftime.

Brighton and Salem barely escaped their first round games.

This is Brighton coach Hugh Coleman’s fourth season with Brighton.  His up-to-date record at BHS is 71-22.

They only used seating on one side of the Salem gymnasium.

Both teams had tremendous quickness.

Junior Malik James has a next-level game already.  His dribbling, shooting, and defending are special.  What does he need to work on?  Ignoring the crowd.  No question the boisterous Salem crowd gave him plenty to listen to.

Somewhere along the line Chris Dunston got his 1000th point.  That info was announced several minutes after the talented senior had fouled out.

David Kazadi tries to block the shot of Nick Simpson