Katie Monahan goes down after firing a shot that became the second Ipswich goal. 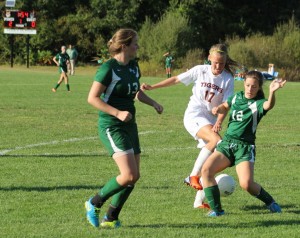 Sydney Law (#17) had two goals for the Tigers

(Ipswich MA) Manchester Essex was the better team over the final thirty minutes.

However, the first fifty minutes belonged to Ipswich as their girls soccer team downed the Hornets, 4-1, on a sunny Tuesday afternoon in Cape Ann League Division 2 action.

Ipswich (2-0-2) pressured ME so much in the first half that their goalkeeper (Hannah Lynch) never touched the ball.

Meanwhile, the Tigers tallied three times in the first half, twice by sophomore Sydney Law and once by senior Katie Monahan.  Two of the Ipswich scores came in the last two minutes of the first half.

Devin Smith breaks in early in the second half

Devin Smith added a fourth IHS goal at 32:20 of the second half.

The rest of the way the Hornets carried the play getting a goal from Bridgett Kiernan six minutes later.

The visitors came close several times in the second half but the Ipswich defense had answers when they needed them.

Manchester Essex (0-3-1) lost most of the one-on-one battles in the first half.  The Tigers, however, had trouble stringing passes together so their scoring chances were good but not great. 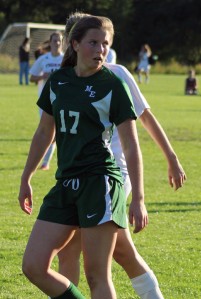 Bridgett Kiernan scored the ME goal with a header

That changed when Ipswich coach Nancy Waddell put in fresh legs after the first ten minutes.  Sophomore Sydney Law was one of the new entrants.  An Ipswich throw-in led to a good shot and a juicy rebound that Sydney drove home at 29:22.

You thought more goals would come quickly but they didn’t thanks to the ME defense led by Kelly Moore.

However, late in the half, senior Katie Monahan drilled a shot past GK Aisling Batchelder’s left.

Those goals gave Ipswich a 3-0 lead after a half.

Devin Smith broke in on the left, in the first part of the second half.  The senior ripped a shot high and hard that the ME GK had no chance on. 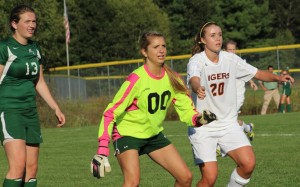 Give credit to the Hornets.  Now down, 4-0, they started to play better.  The key?  They made their short passing game work.  Instead of kicking the ball hard to no one in particular, they began to find teammates.  (It was fun to watch.)

The Hornets were able to get into the Tigers side of the field with some frequency and turn up some scoring chances.

Freshman Bridgett Kiernan picked up the lone ME goal by being in the right place at the right time.  Senior Sarah Lewiecki launched a long shot from the right that was deflected to the far post.  Bridgett was parked in the area and headed home the rebound. 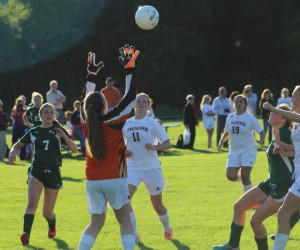 The Hornets put on pressure the rest of the way but couldn’t get a second goal.

I was impressed with the defensive work of ME’s Kelly Moore.  The senior kept things from getting much worse in the first half by clearing away numerous Ipswich scoring chances.

Sydney Law also caught my eye.  Besides being tireless, the sophomore has the skills to create openings for herself.  She should score a lot of goals in 2013.

The Tigers next opponent will be a very good Lynnfield Pioneers team.  Ipswich will start the game in Lynnfield at 3:45PM on Thursday.

The Hornets will host Georgetown on the same day at the same time. 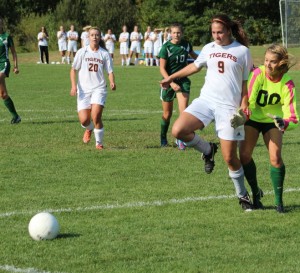 The Hornets (2-15-1 in 2012) are looking to qualify for the tournament for the first time in seven years.

Tigers coach Nancy Waddell told me that former Ipswich soccer star Courtney Long is at Gettysburg.  Courtney was a girl with a shot.

The Tigers had only scored a total of two goals (Emily Evans and Katie Monahan) in the first three games.  Coach Waddell was a goal scorer at Princeton and she told me that more than a few people have asked her why she can’t develop scorers.  She may have one in Sydney Law.

The weather was terrific……sunny and in the high 60s.

Thanks to both teams for providing me with rosters.

action in front of the ME goal