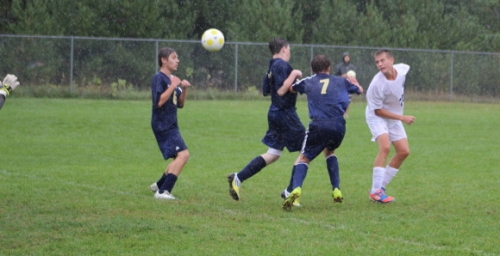 Traip Academy (0-3) continues to chase their first win, and their first goal for that matter.

Today the Class C Rangers were shutout by Class B (2-1) Fryeburg Academy, 3-0, on a wet Friday afternoon of boys soccer.

Sophomore Jordan Kruguer had a goal and an assist to pace the Raiders.

FA clearly had the better of the chances.  Rangers goalie Colin Macomber faced a number of point-blank Raider shots and turned back each one.

Fryeburg Academy was able to get on the board twice in the first half.  Both times the ball got into the middle and from there junior Joe Schrader and then senior Austin German redirected the passes into the net.

Joe drove his in off of a direct kick by Jordan Kruguer at 36:28 of the first half.

Later in the half, senior Ben Davis dribbled along the end line and made a terrific pass setting up Austin’s header at 9:20.

The other Raiders tally was at 9:15 of the second half.  Jordan Kruguer fired a perfectly placed direct kick into the top right corner that GK Colin Macomber never had a chance on.

Johnny Guy had several good chances for the visitors from Kittery.  On one of them, in the second half, GK Blaine Andreoli deflected over the top of the net.

Josh Schneier was in position for a pretty good header deep in the FA end in the second half.

In this game, FA was much better than Traip at dribbling the ball into open spaces.  Gabe Perry, especially, victimized a number of Rangers defenders with his dribbling skills.

Traip will continue their quest for their first win (and goal) next Monday when they visit North Yarmouth Academy for a 3:30PM match. 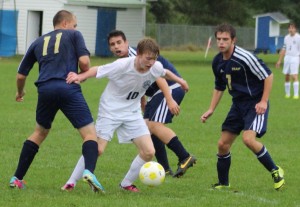 Jordan Kruguer gets away from a trio of Rangers

Fryeburg Academy will try to extend their winning streak to three when they host Waynflete on Monday at 5:30PM.

FA has made the Class B tournament in each of the last five years.

Traip (7-6-1 in 2012) would like to get back to the state tournament after falling short the last four years.

Traip is now coached by Tyler Metevier who was part of the Rangers 2006 Class C state champs team.  Tyler went on to a very good soccer career at Husson in Bangor.

What can you say about the weather?  The forecast was “cloudy,” with rain after the game was over.  Instead, I arrive in rain and there was moisture most of the time.  However, suddenly in the second half the sun came out and you could hardly read the sun-facing scoreboard.  Then it was back to drizzling.  I know the Mark Twain quote: “Everyone talks about the weather but no one does anything about it!”

A cross country meet took place during the game.  I got pictures of the leaders but I have no idea if they held those spots at the end.

Gabe Perry and Pete Roy both exited the game after getting yellow cards. 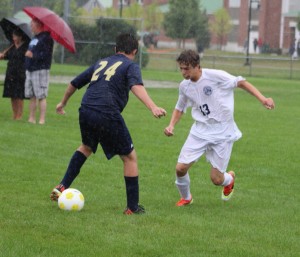 Gabe scored the only goal in FA’s 1-0 win at Poland Regional earlier this week.  Gabe’s penalty kick was stopped, as well a shot off the rebound.  Gabe, however, persisted and headed the ball past the Knights’ goalie.

I marveled at the fact that there was only one official.  It certainly didn’t help that rain wiped out most of the lines on the sidelines.

action in the Traip end

Colin Macomber watches a kick sail over the net