Shelby OBrien hit a 3-run homer in the first inning

(Newburyport MA) Shelby O’Brien’s three-run homer was the big hit for Newburyport in their, 5-2, win over Triton on Monday afternoon.

A huge win for the Clippers (9-8) as they try to qualify for the post-season.  They now need one win in their three remaining games to get it done.

The loss ended a three-game slide for the home team.  Their next game is at Pentucket on Wednesday.

Triton (5-13) had a five game win-streak in mid-season but have struggled in the games before and after that run of good softball.

Newburyport scored three in the first inning and two in the third inning.  Triton got its runs in the first two innings. 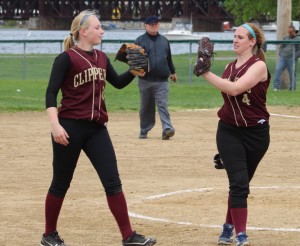 Morgan Johnston and Vicki Allman after the 9th Newburyport win

Senior Vicki Allman pitched a 5-hitter for the Clippers with no walks.  After the first two innings, only one Viking (Emma McGonagle) was able to get to second base over the final five innings.

Vicki was hit hard in the first inning in more ways than one.  Mara Spears led off with a triple to left center.  Third batter (Kylie Gilroy) lined a shot off of Vicki’s left knee.  Vicki was able to recover and throw Kylie out but Mara scored and Vicki went down with a sore knee.  With backup pitcher Stephanie Gleason nowhere in sight, I’m not sure what NHS Lori Solazzo would have done for pitching if Vicki couldn’t continue.  But Vicki did continue and immediately had another liner hit at her which she caught ending the inning.

Newburyport put up three runs of their own in their half of the first.  Morgan Johnston beat out an infield hit and Carley Siemasko singled on the ground to right.  Shelby O’Brien followed with a high fly deep to the right-field corner.  Rightfielder Cailin Fraser had trouble finding the ball because it was over her head, hit high, and influenced by some gusty wind.  Shelby was into third before the ball was even picked up and reached home easily.

The Clippers would load the bases after the homer but Mara Spears struck out Shianne Sneider to limit the damage to three runs.

Triton got a run back in the second.  Sophomore Olivia Lees singled in the hole with two outs and was driven home by Taylor Johnson’s double.  The inning ended with Taylor being tagged out by Newburyport third baseman Meg Stanton.

The Clippers added two runs to their 3-2 lead in their half of the third inning.  Meg Stanton singled and Molly Kelley walked before junior Shianne Sneider hit an RBI single to right.  Ashley Hodge followed with an RBI double to left.

That 5-2 count would hold up the rest of the way.  There were few baserunners as the pitchers (Vicki Allman & Mara Spears and later Haley Johnson) threw strikes and had flawless defense behind them.

Weather?  We had the Big Three in this one: cloudy, rainy, and sunny.  I actually watched quite a few innings from my truck!  My only regret was that Shelby’s homer was hit during the rainy part of the game and my camera was staying dry in my truck.

Casey Barlow, Kendra Dow, and Maddy Stanton were on hand to support their former Newburyport teammates.

Triton plays its last game on Wednesday at Saugus. 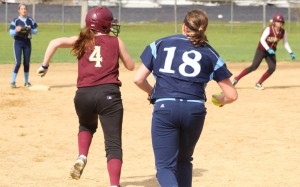 Vicki Allman caught in a rundown 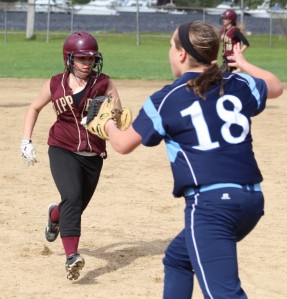 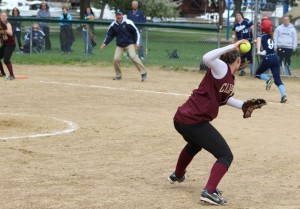 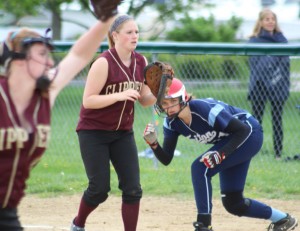 Carley Siemasko looks for a popup hit by Mara Spears

Shannon Lyons tracks down a base hit