(Byfield MA) This game could have used instant replay, a scoreboard, and a calculator!

The Clippers (6-7) trailed 12-3 after four innings but exploded for an eight-run fifth to make things very interesting.

Because of all the activity in that wild Newburyport fifth I lost track of the score and didn’t realize until later that the Clippers were just a run back after that half inning.

Senior Julia Hartman’s solo homer in the bottom of the fifth gave the Vikings (7-3) a two-run cushion (13-11) that barely held up.

Newburyport had the bases loaded in the seventh inning after consecutive singles (Caitlin Clarke, Olivia Salvatore, Emily Dobson).  Key play of the game?  Next batter (Skyla Harrington) hit a hard liner that Triton shortstop Bridget Sheehan speared to her right.  NHS pinchrunner Megan Rogers took off from third on contact and Bridget doubled her off.  Triton pitcher Grace McGonagle was then able to end the game with a caught looking on Colleen Twomey. 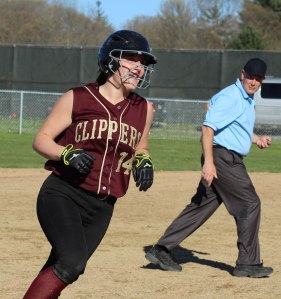 That Triton “limited” Newburyport to only eleven runs was truly remarkable.  The Clippers had eighteen hits and stranded thirteen baserunners in a seven inning game!  The Clippers left the bases loaded in the 7th and two on in the 2nd, 4th, and 5th.  Twice innings were ended on the base paths: baserunner interference (Emily Dobson) and caught stealing (Stephanie Gleason).  I am not sure that I have ever seen a game in which there were more wasted opportunities.

The visitors led 3-1 going into the Triton second.  There the Vikings dropped seven runs on the Clippers.  The Vikings had only two hits in the inning but a bad mix of walks, wild pitches, and errors helped Triton.  Key hits by Zoe Cesati and Julia Hartman drove in runs.  Stephanie Gleason came on to relieve NHS starter Paige Gouldthorpe and pitched the rest of the game. 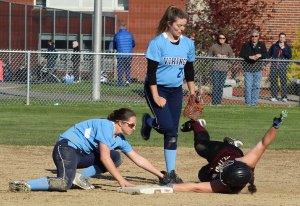 The Triton lead expanded to 12-3 with three runs in the 4th inning.  RBIs in that inning were collected by Emma McGonagle, Julia Hartman, and Chelsea Gordon.

Thoughts of the Mercy Rule danced in my head after Triton led 12-3 but the Clippers in the fifth inning were anything but done.  They whacked Grace McGonagle for nine hits including a homer (Stephanie Gleason) and double and a homer for Emily Dobson.

And anyone at this game will tell you that there was a play during that inning that was hard to figure out.  Bases loaded for Newburyport.  A full-swing squibber rolls just beyond home plate.  The batter drops the bat as she runs to first and the bat lands on top of the ball.  The call?  Batter is out and the runner who was on third is also out.  Nifty double play.  Despite that call Newburyport sent thirteen batters to the plate and tallied eight runs to close to a run.

Everyone in the Newburyport batting order had at least one hit and scored at least one run.  Junior Emily Dobson topped the Clippers with four hits.  Stephanie Gleason and Olivia Salvatore had three apiece.

Julia Hartman and Zoe Cesati paced Triton with three hits each.  Julia’s homer in the 6th inning was a key piece in the Triton victory.

This was the rematch of an 11-4 Triton win in Newburyport in April.

Plenty of sports activity at Triton on this afternoon.  Besides two softball games there were two baseball games, a tennis match and lacrosse practice happening.

Good to see work being done on Triton’s new football stadium.  Supposed to be ready in the fall. 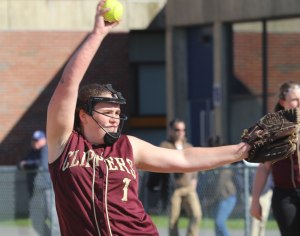 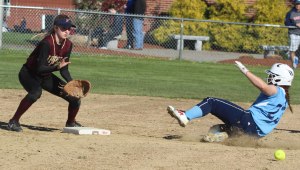 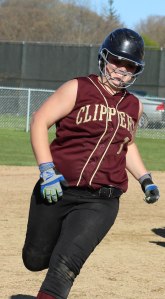 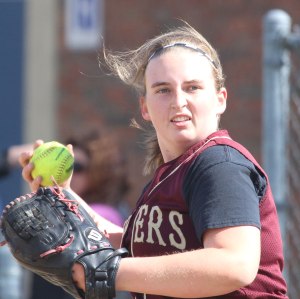 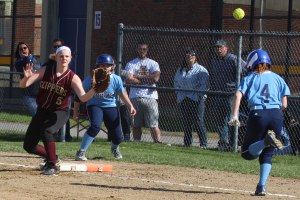 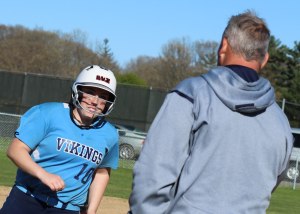 Pitcher Stephanie Gleason gets an out from her knees 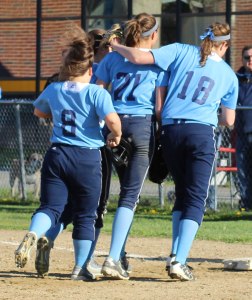 McGonagle sisters after the final out