Eve Paicos reaches 3B as the throw comes to Sydney Daileanes 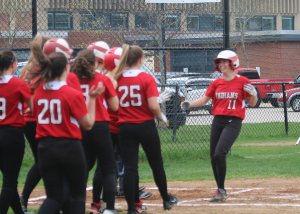 Emma DiPietro homered in the first inning for Amesbury

This afternoon the Vikings (9-1) got themselves into the post-season with a tight 4-1 win over Amesbury.

“This was a big win for Triton,” explained 3rd year coach Dave Dupere afterwards.  “We qualified for the tournament and we did it against two of the best pitchers (Emily O’Donnell & Hayley Catania) in the Cape Ann League.”

Amesbury (4-5) jumped ahead quickly in the first inning as junior Emma DiPietro took advantage of fenceless Perry Field and homered down the left field line.

Katherine Quigley tossed a 4-hitter for the Vikings

“That first-batter homer was a shock,” said Vikings shortstop Bridget Sheehan, “but we are good at bouncing back.”

The immediate 1-0 deficit was a wake-up call for Triton pitcher Katherine Quiqley. “Amesbury is a very good hitting team and I knew that I wanted to keep the ball inside and low on them.  That home run pitch got way too much of the strike zone.”

Lesson learned.  Thereafter, with better pitch spotting, the Indians were limited to only three hits over the final 6 2/3 innings.

The Vikings broke through on AHS starter Emily O’Donnell in the 3rd inning.  Dani West singled to left before Eve Paicos duplicated Emma DiPietro’s homer with a liner/roller to left.

Now ahead 2-1, the Vikings put three hits together in a row in the 4th inning to collect another pair of runs.  A single by Bridget Sheehan was followed by a triple to left center by Emily Karvielis scoring Bridget.  “I thought that the left fielder was going to catch it but then it went into the gap,”said Emily afterwards.”  A Colleen McCarthy single on the ground up the middle drove in Triton’s 4th run.

Eve Paicos rounds second as Amesbury sets up a relay 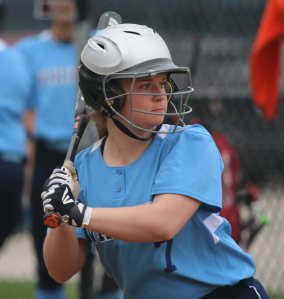 The Eve Paicos homer was a big surprise to me.  Why?  I did the Triton game on Tuesday at Newburyport and never saw Eve play at all.  Today, batting 9th, I wasn’t prepared for her shot to left.  Coach Dupere and Bridget Sheehan both insisted afterwards, however, that the sophomore hits for power.

The Vikings had only six hits and Eve had two of them today.  Next time I won’t be as surprised.

Not surprising to Coach Dupere was the play of his infield.  “In my opinion, we have the best infield in the league.”  Hard not to agree.  With Katherine Quigley keeping the ball down, there were plenty (fourteen) of infield grounders.

3B Colleen McCarthy was busy with seven of them.

2B Emily Karvielis made a diving stop and threw from her knees to end the Amesbury first.

In the 4th inning shortstop Bridget Sheehan made a nice running catch in left.  Later, in the same inning, she was able to handle a two-out grounder despite having baserunner Abby Aponas go in front of her just before the ball got to her.

The Vikings needed all the pitching and defense they could find on this afternoon because Amesbury was on its game.  There were no unearned runs.  No walks.  In five of today’s innings the Vikings totaled just one baserunner!  Relief pitcher Hayley Catania retired the last eight Vikings in a row.

But the four runs were enough for Triton to run their win streak to six.  Their only loss has been to undefeated North Reading, 6-2.  There is a rematch ahead this month.  Might want to see that one!

The Indians haven’t won a game in two weeks.  Today’s performance should be a source of encouragement for their games ahead.  The defense made plays and the pitching was solid.  Now if they can get some hits.  Despite the two-week slide, Amesbury still leads the Baker Division of the CAL.

The Indians had won five straight versus Triton.  Last Vikings win was in 2013.

Triton has six games before they face North Reading.  Four of the teams they face they have already beaten once.  The other two opponents have losing records.  Never good to count your chickens before they’re hatched, however.

Scary moment in the first inning.  A Hayley Catania foul ball curved into the bleachers and caught a lady on the side of the head.  There was immediate attention and ice packs and hopefully she is okay. 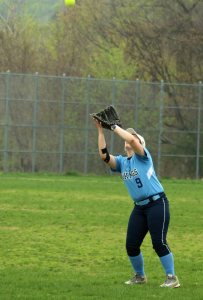 RF Dani West settles under the final out

Triton nearly had the bases loaded in the 5th inning but the home plate umpire reversed a walk to Zoe Cesati after owning up to his mistake on the count.  Zoe then popped up and Bridget lined out stranding the two runners on 2nd and 3rd.

Hayley Catania started the game for AHS at 3B and immediately successfully handled two Triton bunt attempts.  Hayley will attend UMass Boston in the fall to study nursing and play softball.

The weather was overcast and in the low 60s.

3B Colleen McCarthy throws to first

One that got away 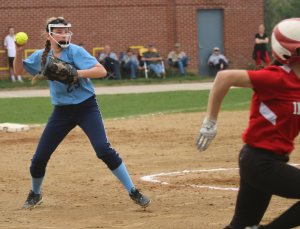 3B Colleen McCarthy had six assists 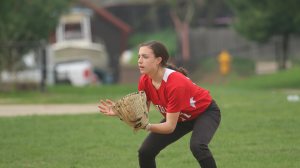 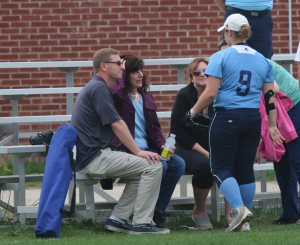