Grace McGonagle tagged out at home by Tara Driver after a great throw from RF Guiliana Peppe. 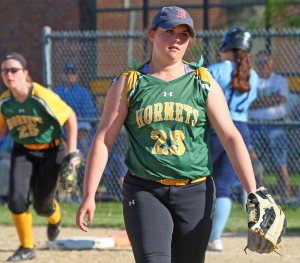 (Byfield MA) Not so fast, Triton!

North Reading was the opponent today riding an undefeated season and a win in April against Triton.

The Hornets (16-0) re-asserted themselves as the best team in the Cape Ann League defeating the Vikings, 5-2, on a sunny Monday afternoon.  Triton had won twelve straight games.

Using Mascores as my source, I figured out that NR has now won fifty straight CAL softball games.  Last loss?  May 18,2015 (5-4) to Pentucket.

This time around Triton was not going to let that happen.  In all four at-bats, Tara was intentionally walked. 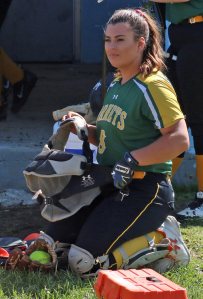 Tara Driver was intentionally walked four times. She will play at D1 Niagara next year.

But we learned today that there’s more to the success of the Hornets than Tara Driver (commit to D1 Niagara).

“We took advantage of the little things,” explained Coach Michelle Morales. “Cassandra did a great job pitching.  She got the outs when she needed them, and she pitched around their bigger hitters.”

Triton coach Dave Dupere narrowed the loss to timely hitting, “They got a couple of timely hits and we didn’t.”

The Vikings (15-2) picked up single runs in the last two innings but stranded eight baserunners in the first five innings.

The visitors took the lead in the third inning when junior Cassie Pascucci doubled in Jess Ferrazzani from second.

The home team looked to have the equalizer in their half of the 3rd but a terrific throw by RF Guiliana Peppe nailed Grace McGonagle at the plate.

This game got away from Triton in the NR fourth inning.  The Hornets put together three runs and I wish that there was instant replay of that inning so that I could be sure that I have what happened right!  North Reading loaded the bases (singles Julia Howse & Abby Paine, walk Christina Simblaris) with no one out.  Then the “what happened” part kicked in.  Shortstop Bridget Sheehan fielded a grounder and tagged out a runner.  No run scored, and the bases stayed loaded. 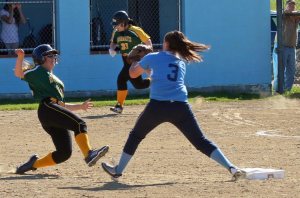 “I told my assistant coach that it was one of those wacky plays that can happen in girls’ softball,” said Coach Dupere.  “It was weird and unfortunate for us.”

Triton broke into that 4-0 deficit with a run in the sixth inning.  It was another inning that instant replay would have been appreciated.

Colleen McCarthy and Liv Doane started the inning with hits.  Dani West moved them up with a fielder’s choice.  Eve Paicos hit a grounder to SS Julia Howse.  Julia tagged the runner near her and threw widly home, allowing Colleen to score.  Catcher Tara Driver found the bad throw and picked Eve Paicos off first base.  The potential for more than one run was wasted.

NR padded their lead to 5-1 in the top of the seventh.  Pinchrunner Elinor DeCleene was driven home by freshman Julie Howse.  This was the only time that intentionally walking Tara Driver hurt the Vikings.

Fay Paicos turns for home in the 7th inning

Another wasted big-inning chance in the Triton 7th.  The Vikings had a run in on CF Abby Paine’s drop of Zoe Cesati’s deep fly to center with only one out.  But Cassie Pascucci K’d Bridget Sheehan looking and got Emily Karvielis to ground out to end the threat and the game.

The Vikings had only two runs in their first meeting with NR.  Both Triton runs today were unearned.

Wasted chances for Triton not only involved hitting but also baserunning.

Coach Dupere: “That team (North Reading) is undefeated for a reason.  They’re a good team but we only lost 5-2. I would love to play them one more time because I think that we could beat them.  I am proud of our girls.  From where they were three years ago to now, I couldn’t be happier.”

Coach Morales: “Tara (Driver) has been walked a lot.  In the past Tara has swung at bad pitches but I told her today to take the walks.  I told her to look south for a college to play for because of the warm weather.”

No strikes for Tara Driver today

Tara Driver: “I’m not bothered that they walk me.  It shows respect.  Sometimes it’s frustrating when we’re not hitting, and they won’t pitch to me.” 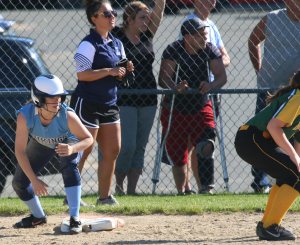 Tara on winning pitcher Cassie Pascucci: “She is very consistent.  Her changeup was good today and she threw a lot of curves.”

Bridget Sheehan: “North Reading is a good team.  They outplayed us today.”

The Vikings have a game left with struggling Hamilton-Wenham.  NR has four non-league games to play.

Both Triton and the Hornets are in Division Two so Coach Dupere’s wish to face them again could come true.  The Vikings have set themselves up for at least one home game in the postseason.

The weather was wonderful.  There may have been a few sunburns handed out! 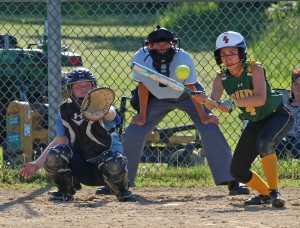 Triton support along the fence 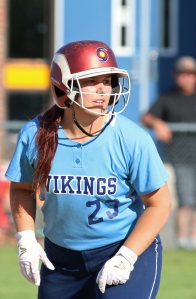