Lexington and North Andover wait on a corner kick

Aleia Gisolfi-McCready had the only goal of the game.

(Lowell MA) Wait until she gets the hang of it!

Lexington’s Aleia Gisolfi-McCready admitted afterwards that she’s scared of heading the ball and doesn’t do it very often.

With just over two minutes left in the first half, teammate Carolyn Lane sent a free kick toward the far post.  The ball went over the elevated Kirsty Carnan and right at Aleia.

Aleia ended up with a facial (“I got a fat lip out of it.”) but the ball went into the North Andover net.

That goal stood up and #8 Lexington won the Divison 1 North semi-finals 1-0 on Wednesday night at Cauley Stadium in Lowell.

“It was an awesome win,” said LHS coach Alex Cram afterwards.  “I’m really proud of them.  They never stop.  It’s such a team effort with this crew.”

Regarding the goal: “Carolyn Lane takes our free kicks.  It was a little weird today because the corners here are short, so she had to adjust.  I think that Aleia’s goal went in off her nose.  Whatever works!” 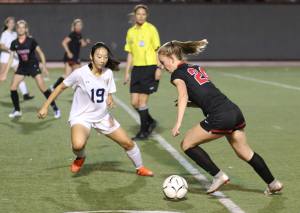 Tough loss for North Andover.  The #4 seed could not put any serious pressure on Lexington. The tell-tale stat for NA (12-5-4) was that they never had a corner kick.

“We couldn’t figure it out offensively,” said Knights coach Lisa Rasanen.  “They (Lexington) won balls in the air.  We needed to play more balls through on the ground.”

Regarding the goal: “They sent everyone up.  They had one kicking and the other nine in the box. We couldn’t cover them all.”

The Knights may have had more shots, but Lex dominated the actual scoring opportunities.

That the only score would require a skill that is yet to be developed by this twosome was the biggest surprise.

“I scouted North Andover and I told the kids that tonight’s game was going to be a fight,” said Coach Caram.  “They have great players and are dangerous up front.  Tonight, our defense was able to handle them.”

Coach Rasanen: “I just wish we were more intense in the first half.  In the second half we were more aggressive and took it to them but couldn’t figure out how to get the ball on goal.  It just wasn’t our night.”

Aleia Gisolfi-McCready: “This is my first year playing with Kirsty.  It has been nice having all the freshman on the team this year.” 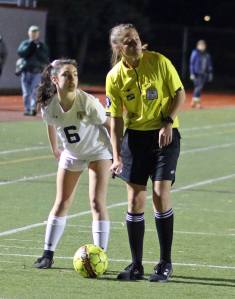 North Andover is from the Merrimack Valley Conference while Lexington is from the Middlesex League.  The two teams met three years ago, and the result was a 1-1 tie.

The playing surface at Cauley Stadium was very fast.

The weather (50 degrees) was a nice change from the persistent rain I faced yesterday at Masconomet.

Rileigh Cinquergrano (7) passes to a teammate 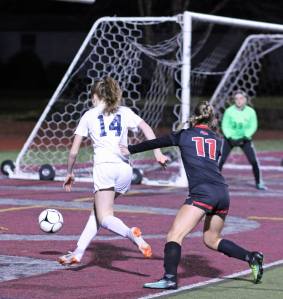