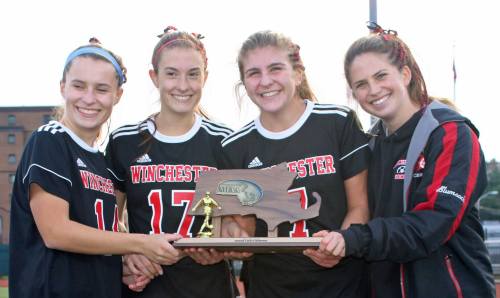 (Lynn MA) It figured to be a close match.

#4 Danvers was the defending D2 state champ while #2 Winchester had lost only once.

But it didn’t turn out that way.

The Warriors (21-1) jumped on the Falcons (18-3-1) from the get-go with two goals in the first three minutes and another one in the first half.

Danvers would get a second-half PK score, but Winchester had separation early and took the D2 North title, 3-1, on Monday afternoon at Manning Field in Lynn.

The Warriors will vie for the D2 state title on Saturday (12:30PM) against Hopkinton at Xaverian High School.

“It was a dream start,” said Winchester coach Rick Emanuel post-game.  “We wanted to establish our style of play which is an attacking style of play.  We wanted to go out as quickly as we can and luckily a couple of our early shots went in.”

“When a goal happens there’s usually another one coming soon,” said Danvers coach Jim Hinchion.  “We hoped it would be us, but it wasn’t.”

Instead it was Winchester’s Hannah Curtin running the right side, turning the corner and driving in the second goal only ninety-four seconds after the first one.

“We definitely weren’t expecting to be able to score that quickly,” said Hannah Curtin afterwards.

“We felt that we would have opportunities wide,” said Coach Emanuel.

The Falcons called timeout after the second goal.  They began to apply pressure.  “At no point did we think this game was out of reach for Danvers,” added Coach Emanuel.  “They are a strong, fast, skilled team that could get those goals.  I saw them do it against Masco.”

Lauren Clement, Arianna Bezanson, and Madison Capezzuto had shots on net for the Falcons during their attempts to get back into the game.

But then the D2 Player-of-the-Year (Hannah Curtin) went to work.  With exceptional speed and dribbling skills, she got past two defenders and drew the attention of other Falcons.  The extra defenders dealing with Hannah left space in the middle unoccupied.  That’s when Hannah sent a pass across the goal that teammate Jordan Weinberg was ready for at the far post.

“I turned away from the second defender,” recalled Hannah, “and crossed it to the second six.  Jordan (Weinberg) was there to finish.”

“We knew that they loved to go to 24 (Hannah Curtin),” said Coach Hinchion. “She’s the player-of-the-year.  When she brings it down the sideline it can open things up in the middle.  You talk about not losing sight of those marks but you’re also trying to see what 24 will do with the ball.”

The three-goal lead made life easier for the Winchester defense. “Having the lead lessens the nerves a little bit,” explained defender Hannah Markham.  “You play with a little more composure.”

“They were a really fast team, so we needed to get to the ball first,” added Hannah.  “There wasn’t a lot of time to dribble out of the back.  We kind of had to play kick-and-run but our forwards are really fast so it works.”

The Falcons trailed 3-0 at the half.

“We’ve been down before and come back but against a team like Winchester that defends so well, it was a lot to ask,” explained Coach Hinchion.

Danvers had several chances early in the second half.  On one of them, Riley DiGilio made a nice run down the left side.  On another, a corner kick ended up on the ground in the box, but Jessica Pelletier couldn’t get a foot on it.

At 22:18 Hannah Markham was whistled for knocking down a Falcon in the box.  Riley Baker converted the penalty kick.

“I didn’t think it was a penalty,” explained Hannah.  “The girl literally hit my body and fell.”

There was time for the Falcons but the Winchester defense, including Hannah Markham, used more long clearances to wear down Danvers and limit their time to attack.

Hannah Markham confessed that she was “still a little bitter over last year’s loss.”

Winchester is from the Middlesex League while Danvers is in the Northeastern Conference. 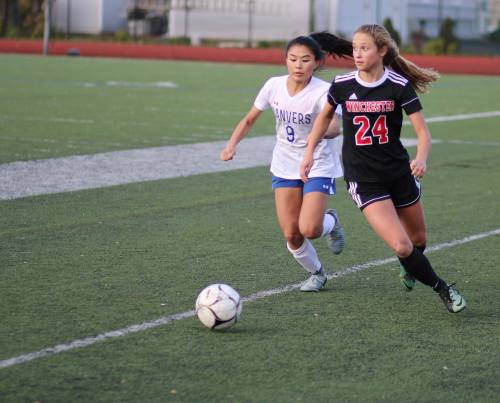 “Hannah has been an important part of our success,” he added, “but she would be the first to tell you that she doesn’t do it alone.”

I take plenty of soccer pictures hoping to find action and the ball.  Usually when players are dribbling, they have their heads down.  In this game I caught Hannah dribbling and at the same time looking toward the middle for teammates to pass to.  Just a sophomore!

College plans? Hannah Markham: “I am going to go to Trinity (Hartford Ct) to play soccer.  I will probably major in business.”

Action around the Winchester goal 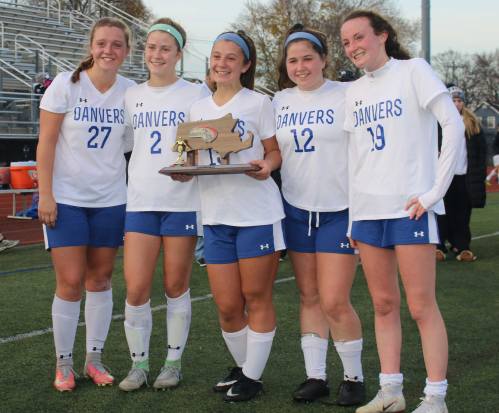 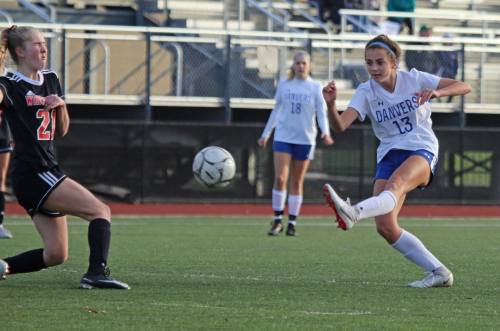 Loose ball in the box