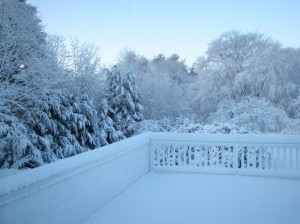 I guess you own a camera for mornings like February 17th in Newburyport.

The snowfall from the previous day/night was there to see on that Wednesday morning.  Toss in some bright sunlight in the early AM and the visuals were terrific.  This is a backyard view.

Trees were especially beautiful with snow still attached to even the thinnest of branches.

I try to walk to and along the Merrimac River boardwalk, every day and I always carry my camera (Canon PowerShot SX10IS) with me just in case something interesting presents itself.

On this day, I wasn’t the only one carrying/using a camera.  I saw one gentleman walking down the middle of a street shooting up into the trees.  There were hardly any cars around, so he wasn’t endangering himself. 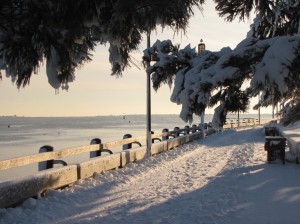 The Merrimac River boardwalk was plowed!  Usually a snowstorm signals the beginning of some tricky footing there.  On this morning, the snow-laden trees add to this naturally attractive spot. 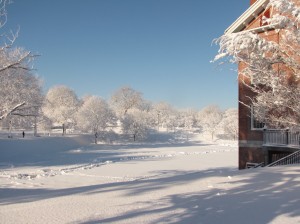 Frog Pond on the Bartlet Mall

I knew that the Bartlet Mall would be visually special with the addition of snow. 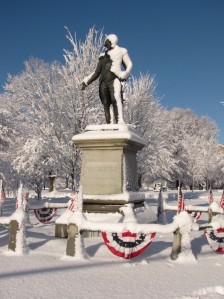 George Washington knows from whence the wind came during the snowstorm

My favorite statue is the George Washington one on the edge of the Bartlet Mall.  No question about the wind direction during the snowstorm is there.

I picked a historic white house on High Street and let the snow highlight it.

Junco waits for a feeder to be cleared of snow.