A union (IBEW), generously supportive of Congressman Tierney, continues to protest in Market Square in Newburyport months after losing on a bidded job at Anna Jaques Hospital.

I have two “paying attention” questions for you:

(1) Am I to believe that you weren’t paying attention when your wife Patrice managed a $10 million bank account of laundered gambling money for seven years from your home?

(2) Are you paying attention to the representatives of the IBEW who are still protesting daily in Market Square in Newburyport?

John, regarding the first question, you’ve been married nearly fifteen years.  You learned early on that Patrice’s family was in trouble with the law.

Don’t tell me that the indictment of her two brothers on 442 counts, including racketeering and money laundering, didn’t stir some concern.

Don’t tell me that her management for seven years of a $10 million account for them wasn’t worthy of additional concern.

You claim that you paid no attention to what your wife did.  How many husbands out there would have done the same thing?  Maybe for seven days but not seven years!

I say you were paying attention to what your wife was doing.  I also say that you chose, for political reasons, not to pay the type of attention almost every other husband would have paid to a wife of 14+ years.  You could have insisted she stop. Certainly as a lawyer, you knew the possible criminal implications of her activities.

My second paying-attention question for you relates to those protesters persisting in Market Square here in Newburyport.  They have a right to be there but what is their point, months later, beyond trying to disparage Anna Jaques Hospital endlessly for turning them down.

When I see those protesters, I know that they represent the International Brotherhood of Electrical Workers (IBEW).  That union is very powerful and politically involved.  They are 9th nationally in campaign donations ($34,445,372.00) from 1989-2011.  97% of their donations have gone to Democrat candidates.  You know the last part, John, because they’ve been funding you generously since 1996. 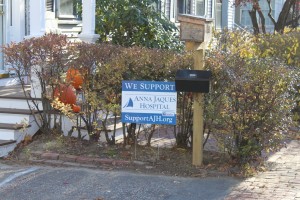 Support for Anna Jaques Hospital is seen all over Newburyport.

The IBEW doesn’t have one supporter in Newburyport willing to step up and admit it.  Visual support for AJH is everywhere.  Many stores, lawns, and cars display evidence that the good guys are the hospital while indirectly revealing with the signs their dislike for the IBEW union.

A rally was held this summer in Newburyport to support AJH.  I’m told that you were invited but chose not to come.  How did you make that choice?

You receive significant financing from the IBEW, and might have been someone that union might listen to on our behalf.  Is their money keeping you from having an active role in opposition to their Newburyport activities?

There still are many potential voters who have not yet made the connection between you and the IBEW.  If they do, I guarantee that they will support AJH before you.  The two are incompatible to anyone paying attention.

I suspect that you are fully informed of what the IBEW has been doing in Newburyport.  I am sure that many residents have attempted to contact you to get you to do something.

These potential voters want you to step up against the IBEW in word and deed.  They want you to tell the union that you disapprove of their continued presence and are willing to accept the consequences because you represent us rather than the IBEW.

I doubt you’ll do this because I think that you’re paying more attention to the potential disaster it would be for you to stand up to the IBEW.  That union didn’t get their way with AJH and look at the nuisance they’ve become.  What would happen to you, and the heavy support they usually give you,  if you got on their wrong side?

My conclusion is that your attention span is politically-motivated.  It certainly should cost you votes in Newburyport if enough folks make the connection between your support from the IBEW and your refusal to speak/act against them in their feud with AJH.

A look over Frog Pond on the Bartlet Mall at the flag display on the morning of September 11, 2011 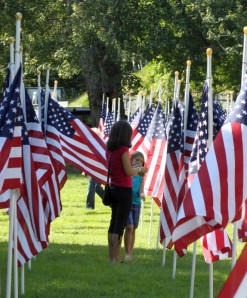 Special time for families among the flags

(Newburyport) I attended the 2nd Annual Field of Honor program on sunny Sunday afternoon on the Bartlet Mall in Newburyport.

Ten years after Muslim terrorists violated this country, numerous speakers remembered the victims and praised the responders.  Much was made of the way this country dropped its differences and pulled together to get through the tough times surrounding the tragedy.

Below is a collection of my pictures taken at the event.  Individual pictures are of participants. 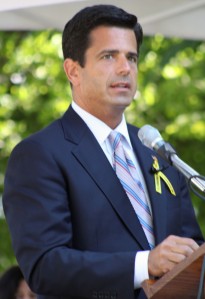 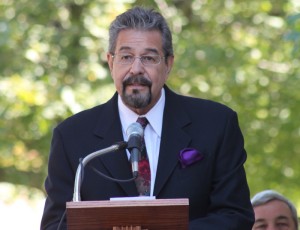 part of the crowd

Tom Ryan reads from his upcoming book while Atticus relaxes. 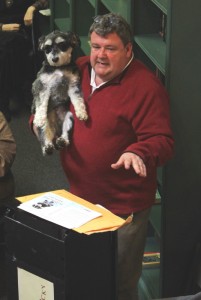 Tom, holding Atticus, told stories of his days in Newburyport.

(Newburyport) My friend Tom Ryan took part in the Newburyport Literary Festival on Saturday at Jabberwocky.

Before a packed space, Tom discussed his Newburyport days as editor of The Undertoad as well as his first book, “Following Atticus,” which comes out in September.

This was an audience of mostly familiar faces for him and there were plenty of hugs and handshakes afterwards.

This was Tom’s debut in the book-promoting business but certainly not his last as he has a major publishing house (William Morrow) heavily committed to his book.  There will be numerous book-related appearances ahead for Tom/Atticus in the months ahead.

As usual, Atticus was on hand to steal the show, which wasn’t too difficult with so many dog lovers in the house.

I wrote in the last issue of The Undertoad, in jest, that I thought Atticus was the brains of that twosome.  The remarkable dog has certainly been the catalyst for much that has gone on in Tom’s post-Newburyport life.

My name surfaced in the presentation.  My recollection is that my name and “homophobe” came out pretty close to each other.  I’d rather it be said of me that my reading of the Bible has led me to the conclusion that the homosexual lifestyle is not something to be encouraged.

Later Tom talked about defending my right to present my views in his paper even when others told him he shouldn’t.  In my view, that makes him “tolerant,” and those who wanted to silence me, “intolerant.”

Further along he added, accurately, that we’ve been friends and still are. 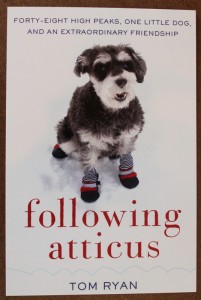 This is what the cover of Tom's book will look like.

He told me a while ago that I appear in the book and it will be interesting to read in September in what context that might be.

My wife and I have gotten together with Tom in North Conway during the summer in previous years and that is likely to continue.  He has talked of coming our way (North Bridgton) and hiking there.  Hawk Mountain (Waterford), which I’ve climbed numerous times, would be good for such a hike in our area.

Anyhow, it was good to see Tom again and watch him continue forward, in what I like to call, “The Year of the Book.” 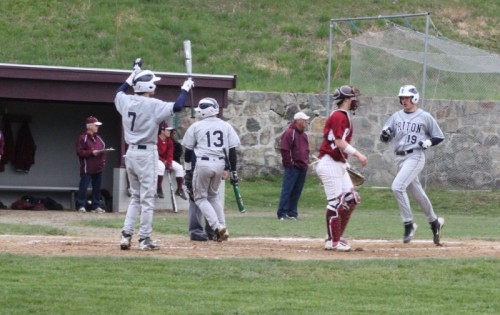 (Newburyport) The visiting Triton Vikings did their part to slow the Clipper march to Coach Bill Pettingell’s 600th win by defeating Newburyport, 8-2, at chilly NHS on Tuesday in Cape Ann League play.

The NHS coach holds at 598 wins thanks in a large part to the pitching and hitting of 2010 CAL All-Leaguer Blaise Whitman.

Blaise pitched a complete game five-hitter with seven strikeouts.  He also hustled to cover first in the last inning to record the last out.

At the bat, Blaise was part of a seven-hit attack, going two-for-four, scoring a couple of runs, and driving in a run in the 4-run sixth.

That 4-run sixth pushed this game into the comfort zone for Triton as their lead increased to 7-1.

The Vikings (3-2) put up three runs in the first on Newburyport (5-2) as a walk by starter Brett Fontaine  and a string of errors turned into three runs.  Mike Fish drove in two of the runs with a double to left center.

The Clippers got a run back in the second as Sam Barlow’s single drove in Colby Morris.  However, NHS ran themselves out of possibly a bigger inning when CF Mike Fish gunned down Sam, for the final out, at second trying to stretch that single.

Triton left the bases loaded in the third as Brett caught Tim Cashman looking to end it.

Newburyport stranded two in the fourth as Blaise got a fly-out to left by Colby Morris for the final out.

The Vikings took a tenuous 3-1 lead into the sixth inning and came out of that inning with breathing room.

Coach Pettingell and the home plate umpire did not always see eye-to-eye on balls and strikes.

Now down 7-1, the Clippers got a couple of base runners before Blaise retired the very dangerous Ryan O’Connor on a ground out to end the threat in the bottom of the sixth.

Triton capitalized on reliever Drew Carter’s wildness (two walks and two wild pitches) in the seventh to get their 8th run scored by Ace Knowles.

A couple of walks by tiring Blaise Whitman led to an RBI single by Colton Fontaine in the last of the seventh.Weather conditions continue to be tough to take.

No rain but the faithful experienced a persistent breeze with temps in the low 50s.  Winter clothing would have made perfect sense.

The Clippers were probably convinced that it wasn’t their day in the bottom of the 6th.  David Cusack hit a very high popup in front of the Newburyport dugout.  Tim Cashman raced in from third and had the ball bounce off his glove into the hands of the Viking’s hustling catcher Cote Wolcik.

The wind may have kept a deep fly to center in the first in the park hit by leadoff batter David Cusack.  Also in the first, Ace Knowles’ popup, that fell between fielders for an error, appeared to be wind influenced.

(I collect my own stats and take my own pictures and try very hard to be accurate.)

Comments Off on Blaise Whitman Leads Triton Past Newburyport 8-2 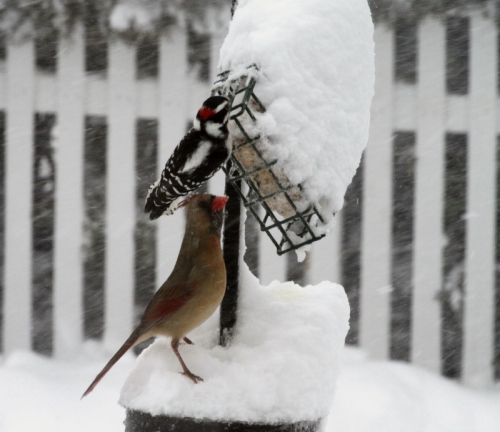 This picture appeared in the January 19-25 issue of The Town Common with this caption: “A male downy woodpecker and a female cardinal find suet during Wednesday’s blizzard in Newburyport.”

This picture was taken during the snowstorm on January 12th through a slider in our side yard in Newburyport.  We have a wide assortment of birds visiting our numerous feeding options. 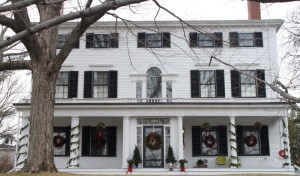 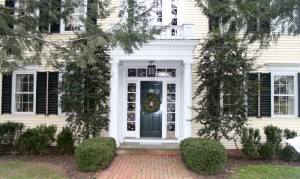 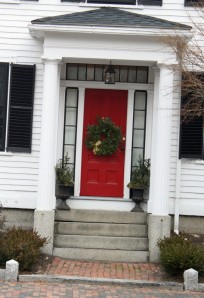 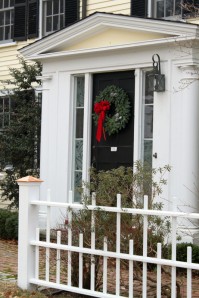 Rocking horse in front of the Christmas tree at the Cushing House Museum.

I shot this picture on December 6, 2010 at the Cushing House Museum.

My wife and I are members but I had never been inside before.

I brought my camera (Canon Rebel T1i) back on a second visit that day after getting permission to take pictures.

I thought that a Christmas picture would work in a December issue.  Their tree, however, was in front of bright light and very thin.

I spotted the rocking horse under the tree and learned from the curator Jay Williamson that it was dated 1850.

(The picture appeared in the December 15-21 issue of The Town Common.)