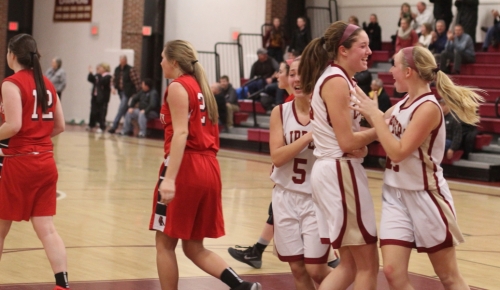 (Newburyport MA) It was one of those nights for Newburyport sophomore Olivia Olson.

Olivia paced the Clippers (2-5) with twenty points but her biggest shot of the night was a complete miss that set up the game-winner in Newburyport’s 50-48, win over Amesbury on Monday night.

Olivia’s late-in-the-game launch was undershot but came right to teammate Emily Pettigrew (11 points) under the basket.  Emily, who struggled all game to get open, was wide open on this occasion and cashed the last-second layup to seal the deal for the Clippers.

Amesbury (3-3) had rallied in the last minute on inside scores by Abbie Sartori and McKenzie Cloutier to knot things at 48-48 before Newburyport’s last-second heart breaker.

The Indians were down by as many as eight (23-15) in the first half but miscues by the Clippers in the 3rd quarter (eight turnovers) opened the comeback door for the visitors.  Maddie Napoli’s fall-away 3-pointer put Amesbury ahead, 30-28, with 2 1/2 minutes left in the quarter.  Newburyport (2-5) responded with seven unanswered points.  Amesbury tied the score at 43 (converted rebound by Megan Reid) and later at 48 with seventeen seconds left.

Olivia Olson hit five 3’s getting at least one in each quarter.  Her work defending the Indians’ top scorer Amanda Martin was also noteworthy.  Olivia limited the Cape Ann League second-teamer to seven free throws.  Amanda did miss a number of minutes in the second half because of foul trouble.

The Indians’ zone defense was very effective in keeping the ball away from 6′ Emily Pettigrew (CAL first team).  Amesbury’s concentration on the inside opened opportunities on the outside and on this night Olivia Olson took full advantage.

Emily’s layin in the last second won the game but she also had a three from the right corner (set up by Michaela Corvi) that put NHS in front by four with 1 1/2 minutes to go.

Sophomore Maddie Napoli (16 points) impressed at point guard for Amesbury.  The Indians had only five turnovers in the second half. Maddie hit two 3’s and made several difficult layups in the lane.

Newburyport travels to Everett on Wednesday night.  Next for Amesbury is an away game versus Pentucket on Friday night.

No one seemed to know when the last time was that Amesbury defeated Newburyport.  Believe me; they nearly pulled it off in this game! 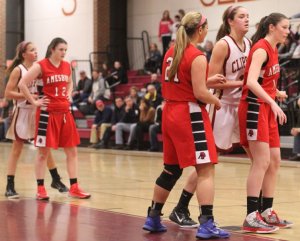 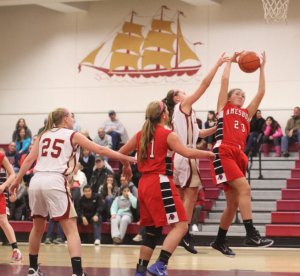 McKenzie Cloutier gets a rebound 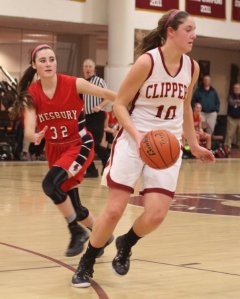 scramble on the floor