Cam Armand (13 points) gets out front

(Byfield MA) Triton finally found happiness in the New Year with a 63-40 victory over Shawsheen in non-league action on Wednesday night.

Both teams entered the contest winless in two attempts in 2015.

Shawsheen (2-3) stayed close for a quarter and even had a 14-12 edge 1+ minutes into the second quarter but after that Triton’s long-range accuracy enabled them to pull away for good.

The Vikings (2-6) drained nine long ones.  The Rams clicked twice from beyond the arc (Sean Hines) in the first period but came up empty thereafter.

The team from Billerica was still within comeback range trailing 44-34 with a minute left in the 3rd quarter.  However, Triton put a 10-1 segment together over the next five minutes of playing time into the final quarter and gained separation, 54-35.  Eric Rybicki had two three’s to pace the Vikings in that run of good offense.

Coach Dave Clay used everyone on his bench.  There was no noticeable dropoff in hustle no matter who was playing.

Ellsworth Rogers now has the cast off his arm.  He is hoping to return to action for Triton later in January.

Shawsheen are Division 3 and play in the Commonwealth Athletic Conference.  The Rams were 6-14 last season.  Their next game will be against CAC opponent Chelsea at home on Friday night (7PM). 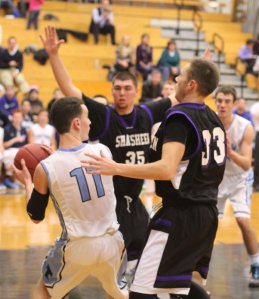 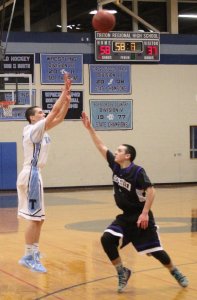