Geo Baker (33 points) hit two free throws, had a steal, and a layup in the last minute

(Durham NH) It is not easy to get excited about a rematch between teams that were separated by forty-nine points (74-25) in their first meeting in January.

But #15 seed Nashua North reached the Division 1 semifinals and that gave the Titans a second chance with Pinkerton Academy at UNH on Tuesday night.

And what a rematch it was.  The underdogs went down by ten early but came back with a run of eighteen straight points to lead by eleven at halftime.

But in the second half PA’s sophomore Geo Baker took over getting twenty-two points leading the Astros to a 63-58 win and a trip to the finals at UNH on Saturday afternoon.  The Astros will face undefeated Londonderry for the title.

Pinkerton (18-3) rode the long ball in the second half.  Geo (33 points) had five from beyond the arc while teammate Brennan Morris dialed long distance successfully three times.

PA’s nine second-half 3-pointers had plenty to do with the Astros comeback.  Crunch time, however, belonged to Geo.  The Astros lead was a slim two points (58-56) with fifty seconds left and they had the ball.  The Titans were forced to foul and since Geo had the ball so much he was the one fouled.  He made two pressure free throws in a one-and-one situation to push the PA lead to four.  Next Nashua North possession Geo stole Brennan Kastens’ pass.  Again Geo was fouled but this time he missed with twenty-one seconds left.  NN’s Brendan Barrett got the rebound but his pass was picked off by Tommy Romick.  Tommy quickly fed nearby Geo for a killer layup and a six-point PA lead with sixteen seconds left.  No six-point play in the NN playbook so their remarkable tournament run came to an end.

Geo’s stat line in the second half was 22 points, 3 rebounds, 3 assists, and 3 steals.  No turnovers in his second half stat line.

The Titans (8-13) looked like the #15 seed in the first quarter falling behind 17-7.  Geo Baker had two three’s in the early going and Matt Rizzo also had one. 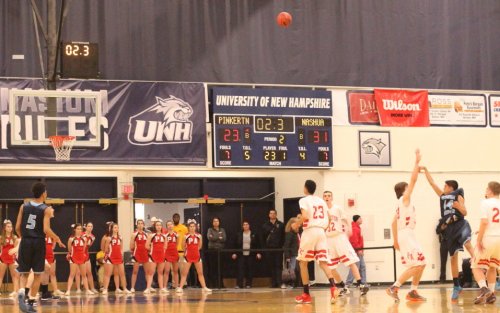 Ronnie Silva ended the first half with a long three

Nashua North, however, was taking good care of the ball (3 turnovers in the first half).  In the second period PA had a 23-16 lead with 4:37 left.  How do you explain what happened the rest of the quarter?  You never saw momentum shift the way it did.  The Astros didn’t make a point the rest of the quarter while the Titans, led by quick guard Ronnie Silva, couldn’t miss.  The #15 seed ran eighteen unanswered points, including four 3’s from Ronnie, and left the court ahead, 34-23.  Ronnie’s last three had NBA length and was just before the buzzer.

Stunned would be the way I would describe the halftime atmosphere.  The big question was whether or not the Titans could generate enough points in their one-shot possessions against a taller PA squad to stay ahead in the second half.

In the second half the Astros shut out Ronnie Silva and defended the Titans into twelve turnovers.  One shot possessions are one thing, when you’re hot, but twelve no-shot possessions added to them will do a team in.  And if you add Geo Baker’s remarkable second half to the mix you can see why Pinkerton rallied back.

Brennan Kastens, Geo Baker, and David Faulks had dunks in the game.  David’s throw down was set up by a terrific Geo Baker pass.

Good crowd on hand.  I suspect that most of the Spaulding/Londonderry early arrivals were encouraging the Titans to knock off #3 seed Pinkerton Academy.

Brennan Morris (12 points) ends the third with a long three 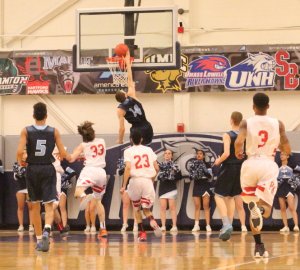 Ronnie Silva had five 3-pointers in the first half

Drew Green goes for the block on Brandon Rodriguez 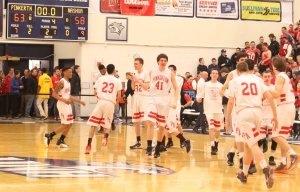 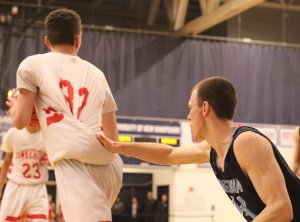