Matt Rizzo set to launch the last shot of the game

Brandon Radford scored the game-winner. Here he applies some defense

Londonderry should be one happy place for a while since both girls and boys basketball teams were still standing after championship games today and last Saturday.  Nashua did the same thing back in 1986.

As you can tell by the low final score, both teams struggled to have good offense and good defense together at the same time.  That is why the game came down to the last made shot.  Neither team was ahead by more than a point over the closing tense 4 ½ minutes of the game.

The undefeated Lancers (22-0) scored what turned out to be the winning basket with fifty seconds left.  Matt Rizzo (12 points) missed a free throw and Jake Coleman collected his 11th rebound.  The Lancers’ Brandon Radford was lined up on the inside position for the free throw and when his teammate secured the rebound Brandon took off full-speed for the other end completely unnoticed by anyone on PA.  Jake Coleman took a couple of dribbles and spotted and threw a pass to his wide-open sophomore teammate who finished with a layup.  That gave Londonderry a 47-46 lead that turned out to be the final score.

Believe me, after that basket with fifty seconds to go, the excitement was far from over.  The Astros used thirty seconds of clock before Geo Baker lost the ball out-of-bounds.  In bounds the ball came to Jake Coleman who was fouled with twelve seconds left.  Here was a chance for Londonderry to add some comfort to a one-point lead but Jake missed.  The Astros got the ball into the hands of Geo Baker and I was quite certain he would take the final shot.  Geo, however, was unable to penetrate and was forced left and forced to give up the ball without a shot.  Matt Rizzo ended up with the ball straightaway from beyond the arc.  Matt had time to fake Jake Coleman away from him and get off a shot before the buzzer sounded. The shot missed but not by much!  And the celebrating began for the Lancers.

Credit the Londonderry defense in that last play for keeping Geo from penetrating and for forcing Matt into a very tough final shot. 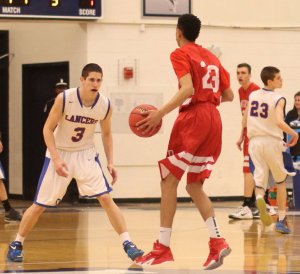 Londonderry generated good offense/defense together in 2 ½ minutes of the second quarter running ten straight points together.  Two three’s by Jake Coleman (14 first half points) and a three and a free throw by Marc Corey (17 points) put the Lancers in front, 25-17.

It was Pinkerton’s turn to put the D & 0 together in the third quarter.  The Astros (18-4) collected the first ten points of that quarter (3-pointers by Drew Green and Matt Rizzo were part of it) to get in front, 35-32.

You read this far in a story of a Londonderry basketball game in 2014-15 and no mention yet of NH Division 1 Player-of-the-Year Cody Ball.  Cody, on this afternoon, was a cold-shooting (2-for-12) foul magnet.  Cody (St. Anselm’s next year) missed a good part of the third quarter after his fourth foul.

Jake Coleman held Londonderry together with his fourteen points/six rebounds in the first half.  His ability to handle the ball in the second half without turnovers was crucial.  His ability to see a wide open Brandon Radford in the last minute, for the game-winner, was huge. 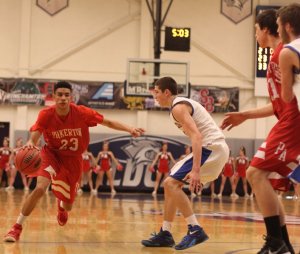 Geo Baker looks for an opening

Sophomore Geo Baker spent his freshman year at Buckingham, Browne, and Nichols (BBN) in Cambridge before transferring to Pinkerton Academy in Derry.

The two teams met during the regular season at PA in February.  The Lancers won 67-61 in a game in which Cody Ball had five 3’s and Jake Coleman had twenty-five points.  David Faulks had twenty points in that game including four dunks.

Great crowd and the way the game went back and forth both sides had plenty of opportunity to get excited.

The UNH stat crew did, and do, an excellent job.

(All of the pictures below and above enlarge considerably if you click on them.)

Jake Coleman had a turnover-free game despite plenty of ballhandling 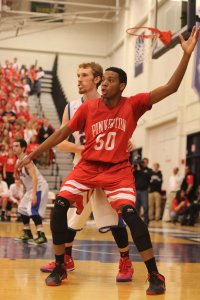