Eamon McElhinney (4) and Nate Bass (8) battle near the goal

(Newburyport MA) A win would have given Lynnfield the most wins they’ve ever had in a season.

But there was a bigger picture, and that changed the tone of today’s matchup with Newburyport.

The seedings for the post-season tournament are in and Lynnfield is #1.  That position would not be affected by this afternoon’s game.

“The kids wanted to win it,” said Lynnfield coach Brent Munroe, “but it wasn’t a meaningful game for us.”

The Clippers also had a position in the tournament sewn up too.  So you had two teams in their own versions of “spring training” mode.

Newburyport won the game 2-0 getting second-half goals from Andrew Moreland and Ronan Harrington.

“That loss fueled us to come back here and play better,” Newburyport goalie Aiden Guthro told me afterwards.

Despite playing everyone who was dressed to play, the Pioneers put plenty of pressure on the Clippers.  “They have some great players,” said Aiden.  “I can’t say enough about everyone in the back.”

The most dangerous of the Lynnfield forwards was senior Nate Bass.  He was a master at winning 50/50 balls and dribbling past players.  His best chance was a break-in from the right in the second half.  Aiden came out to challenge, and may have deflected the shot, as it rolled just wide left late in the game.

While the Clippers may have had fewer chances, they did cash in two of them.

Senior Andrew Moreland collected his fourth goal of the season less than minute into the second half.  “The ball bounced back to me after a throw-in,” explained Andrew.  “I was at the corner of the box when I got the ball.  I deliberately drove it into the upper right corner.” 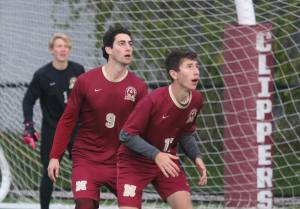 “That first goal surprised us,” said Coach Munroe.  “It was a long shot to a good spot.  Our goalie had no chance.  I’m not sure that he knew that the shot had been taken.”

Lynnfield carried the play after Newburyport’s first goal but couldn’t find the equalizer.

In the last two minutes the Clippers were awarded a free kick from straightaway.  Senior Ronan Harrington took the kick.

“Ronan is probably the best free-kick taker in the Cape Ann League,” said Aiden.  “Anywhere inside of twenty yards he’ll put it in the top corner.  I felt confident with him taking the shot.”

Ronan sent his shot into the same upper corner that Andrew Moreland had earlier.

The Clippers came away with a satisfying 2-0 win.

Brent Munroe: “We’ll be the #1 seed in the tournament and hopefully we’ll play our best soccer during the next two weeks starting Sunday.” 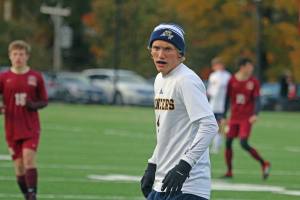 Jon Luders: “It was good to get guys minutes.  I still don’t like losing.  You want to win no matter what.  Now we’re on to the tournament.”

The Pioneers had gone nine straight games without a loss prior to today’s game.

The Clippers haven’t lost in six of their previous seven games.

Newburyport’s stadium is a terrific place to watch a soccer game with its elevated viewing on both sides.  I was on the turf surface which is also very good.

I wanted to talk to Newburyport coach Shawn Bleau after the game, but he “opted” to go to the parent/teacher open house being held indoors.  As a former teacher, I know that there are some things you don’t miss!

The shutout was GK Aiden Guthro’s ninth of the season.  He holds the Newburyport career shutout record with twenty-three of them. 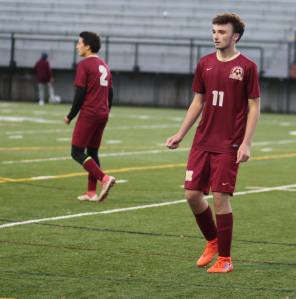 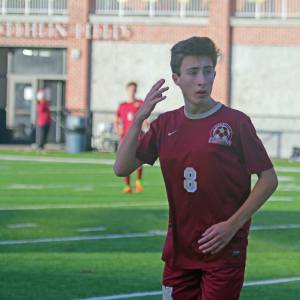 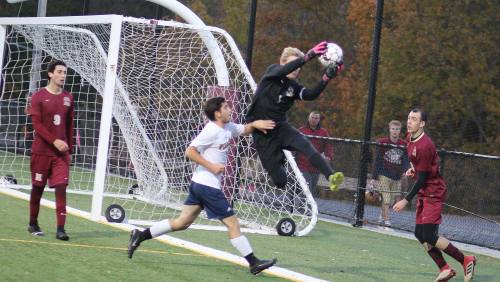 Aiden Guthro leaps to save