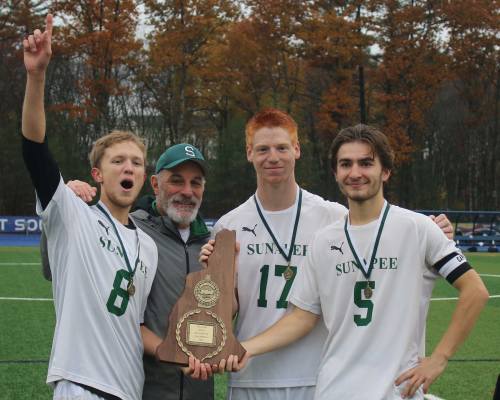 (Hooksett NH) “We won this one for Ike.”

I heard that and, as an older person, could only think of President Dwight David Eisenhower.

The Lakers scored in the last two minutes and defeated undefeated Newmarket 1-0 on a wet Saturday afternoon at Penmen Field on the campus of SNHU to win the DIV championship.

Sunapee goalie Justin Claus (52) up to clear a corner kick

“We told him after the game that this one was for him,” said captain Lane Smith.  “The amount of work he’s put into this program.  No one deserves it more than him.” This was Sunapee’s first title.

Sunapee was an improbable DIV winner.  Why?  They had never won a title before.  Also, they had lost to the Mules twice during the regular season.

“Our defense won the game for us,” said a proud Coach Iacopino afterwards.

The Lakers (17-3) changed their approach during the second half of the season.  “We wanted to play good defense first and then see if we could create a few opportunities with Michael’s speed,” explained Coach Iacopino.  “Our defense has been excellent the last eight games (all wins).  I think we only gave up a couple of goals during that stretch.”

Coach Nate Dowst of Newmarket was on the wrong end of a second-half goal, that was called off, and later watched a miscommunication result in the late-game winner for Sunapee.

“Soccer can be cruel sometimes,” he said.  “I thought we had the go-ahead goal (29:29).  To me it looked onside, but they said it wasn’t.  But you’ve got to keep playing. They put us under pressure at the end and our mistake led to the goal.”

Junior Mike Mullen got that goal by going full speed and being in the right place at the right time.  “Fred (Holmes) tried to head the ball back to his goalie (Colby Foster) but it got past him,” explained Mike.  “It was just an open goal for me.”

Mike’s role for much of the game was to wait.  “My job was to play their mistakes on defense.  I only had a couple of opportunities since they had the ball at least 80% of the time.”

I reminded Mike that Sunapee had lost to Newmarket twice.  “I’ve been relating that to the Super Bowl in which the undefeated Patriots lost to the Giants,” he said.  Talk about a painful memory!

I saw Newmarket defeat Epping 3-0 in October.  In that game I saw a team that really applies pressure.  I saw Lucas Russell turn throw-in’s into scoring chances.  I saw the Mules put shots on net and end up with numerous corner kicks.  Today was more of the same without any of the happy endings.

“We had plenty of set pieces but couldn’t quite get to a foot or a head,” recalled Coach Dowst.  “The difference wasn’t the quantity (Newmarket had 23 shots) but the quality of our shots.”

Credit that Sunapee defense.  “They were very good in the box,” said Coach Dowst.

“We went to every ball hard,” said Coach Iacopino.

“Our priority one was not to let them score,” said Lane Smith.  “We didn’t dominate this game at all, but we didn’t let in any goals.  In fact, we didn’t allow a goal in the playoffs.”

It did look, however, as if Sunapee had allowed a goal at 29:29 of the second half.  Mules junior Nick Berthiaume caught up to a ball on the left side, defended by Matt Nangeroni.  Nick got off a shot and it beat Sunapee GK Justin Claus.

“That was horrifying for us,” said Justin afterwards.  “It was a big moment for us when it was called offsides.”

As my picture shows, even the scoreboard person at the stadium thought it was a goal, but that quickly changed and Newmarket never could get a “1” on that scoreboard.

I was again impressed with Newmarket’s Fred Holmes.  Yes, I know he was part of the mix-up that led to the Sunapee goal, but beyond that Fred was all over the field defending and creating opportunities for the Mules.  On all the set pieces Fred left his normal defensive post and was in close to the goal.  During one memorable segment, in the first half, Fred was in the middle of the action on a Simon Cote free kick and then hustled all the way to the other end to clear the ball out of bounds with a sliding tackle.  The kid can play!

Mike Mullen’s goals was his 36th of the season. He also had nine assists.  Lane Smith had twelve goals and ten assists.

Although the loss would take a while to get over, Coach Dowst was optimistic about next season.  “We lose six seniors, but we return thirteen varsity players.  Hopefully we can work hard enough to get back here next year.”

The stadium was awesome.  Plenty of seats and also some places where you could watch in the rain…….and there was plenty of that going on.  The SNHU staff provided all the stats I needed in a very nice press box area.

I try, when I remember, to ask senior players what they will be doing next year.

Justin Claus: “I am interested in bio-medical engineering.  I’ve applied to UNH, UMaine, and UConn.”

Lane Smith: “I’m going to get to West Virginia to study business.”

(You definitely need to click on my pictures to get the full-size view.  The sequence on the Mike Mullen goal really requires an enlarged look that only a click will give you.)

Trio after the ball

Scoreboard has the Newmarket goal