(Newburyport MA) “On to Lynnfield!”

George Coryell said it to me after the game as the Newburyport Clippers took out Weston 2-1 in overtime on Friday afternoon.

The Division 3 First Round win moves NHS (10-4-5) on to a rematch on the road on Sunday against the Pioneers.

#1 seed Lynnfield promises to be a more motivated opponent than they were earlier this week in a 3-0 loss to the Clippers.  Entering that game, the Pioneers had already clinched the #1 seed whether they won or lost at Newburyport.  Sunday’s rematch should have a much higher intensity level.

Senior George Coryell had two goals for #8 Newburyport.  One tied the score in the second half and the other was the game-winner 5+ minutes into overtime.

The Wildcats had dribblers, passers, and plenty of opportunities.  That they didn’t win was a surprise to Weston coach Andrey Asparouhov.  “We had control the whole game.  I still don’t know how we lost the game.  It’s unbelievable.”

The Wildcats (8-7-4) took a one-goal lead on a rebound conversion by Clayton Mullen with seven minutes left in the first half.

That lead looked to be enough, but not to Coach Asparouhov.  “We knew that we needed the second goal to close out the game, but we couldn’t get it.” 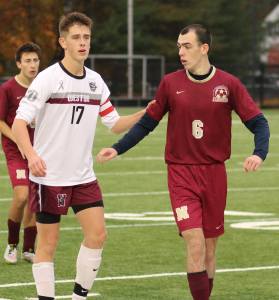 George scored the tying goal and how it happened was even a blur to him when I asked him about it.

Teammate Jack Healy credited freshman Max Gagnon for setting George up for the second-half break in.  “Max placed the ball over the defense,” explained Jack.  “He did the same thing on the overtime goal.”

According to Coach Bleau, “Their keeper made an incredible save on George’s break-in in the second half. Then Ryan Archer put the ball back in the box and George finished it.”

Coach Bleau continued with the offensive attack in the overtime.  “It worked to get us the tying goal, so we decided to go for the win and not get to penalty kicks.”

Opening up the attack meant loosening up their defense but on this afternoon the strategy was gold for the home team.

George’s game-winner followed a foot race with defender Andres Castillo.  “We made a bad pass and they had the speed to take advantage of it,” said Coach Asparouhov. 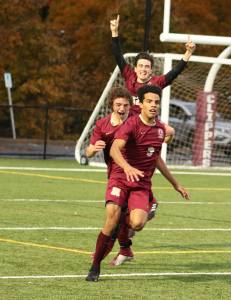 I will guess, based on what Jack Healy told me, that Max was the interceptor as well as the one who sent George on his way to the game-winner.

George gained separation from his defender and slid the ball past onrushing Weston GK Edward Pomianek.

“It feels good to get a win in the playoffs,” said Jack Healy afterwards.  The Clippers lost 1-0 to Bedford in the first round last year.  Prior to that, the last Newburyport playoff win was in 2012.

“It was a team effort,” said George Coryell. “Everyone playing together and trusting each other.  We knew that these guys were good.  Now it’s on to Lynnfield.”

Newburyport goalie Aiden Guthro won’t have fond memories of the Weston goal.  On that goal, Brian Hall took a hard shot from the left.  The normally sure-handed goalie (Cape Ann League All-Star) had the ball go through his hands and there was Weston’s Clayton Mullen rushing in looking for just such a rebound.  In the net it went.  “I’m glad that the goal didn’t decide the game. Aiden will get to play some more,” said Coach Bleau. 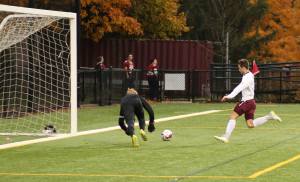 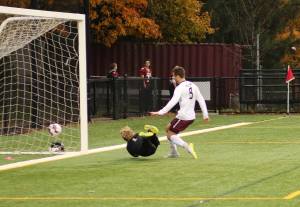 The game was physical at times.  A number of times the Wildcats questioned non-calls.

With 7:24 left in regulation, the referee called time and brought the captains and the coaches together and sorted out how the rest of the game would, and would not, be played.  It seemed to settle things down.

On one of my pictures of George Coryell, in the final rush to get a shot the defender clearly has a handful of his shirt.

Very impressed with Weston’s Brian Hall.  The senior had the size and athleticism to create trouble in the box.  He was in GK Aiden Guthro’s space several times as my pictures show.

The teams did their post-game handshake after regulation instead of trying it after an exciting/devastating overtime ending.

Football game, also against Weston, was slated for later in the evening.

Weston plays in the Dual County League while Newburyport is in the Cape Ann League.

Aiden Guthro chases a ball in the box 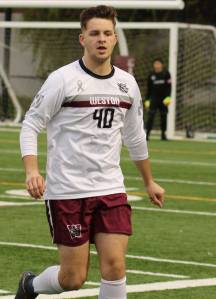 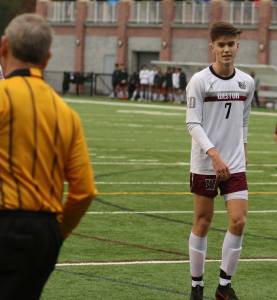 Brian Hall chats with the referee