Masconomet runs away from Newburyport 62-32 in girls basketball 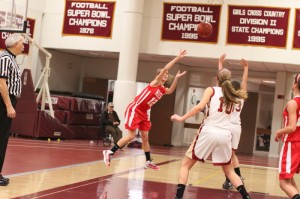 (Newburyport) After losing badly to the cream of Division 3 (Pentucket) on Friday, Newburyport hoped for a better outing against Masconomet.

“Ran away” is a good description because the Chieftains put fastbreak after fastbreak on the cold shooting home team.  The Clippers (3-4) got caught numerous times chasing offensive rebounds instead of getting back on defense.

When Masco wasn’t getting layups (they had fourteen) they were getting foul shots (they had twenty-eight).

The Chieftains made eighteen free throws. 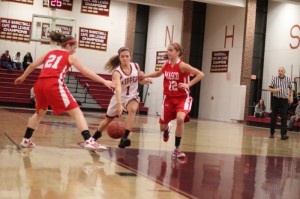 Aly Leahy of Newburyport opened the scoring with a free throw.  Nicole Femino (14 points) matched that and then sent Hannah Kiernan (12 points) off on a breakaway layup.  Hannah’s basket gave Masco the lead (3-1) for good.

The Chieftains started the second half with a 12-4 run over 3 ½ minutes to increase their lead to, 40-16.  Sophomore Meghan Collins (8 points) scored the first two baskets, one on a nice spin move.

During the last 12 ½ minutes of the game Newburyport was only outscored, 22-16, but this was not a night in which a late rally materialized.

There was no point in the game where the Clippers were able to put more than four points together in a row.  Cold shooting was part of it but the Chieftains were defending well inside – Newburyport scored four layups in the game.

On the other hand, because of the frequency of layups, Masco ran points together. On seven different occasions they scored at least six points in a row.

Lilly Donovan (9 points) paced Newburyport.  She hit a three in the first quarter that went off the backboard.

Casey Barlow (8 points) was credited with a basket when her attempt at a pass under the basket was deflected in off a Masconomet player.

Coach Bob Romeo of Masco was deep into his bench late in the first half.  He ended up having eleven different players score. 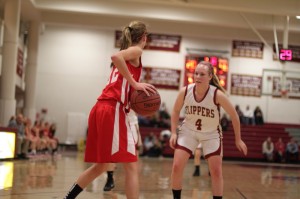 You have to feel sorry for Newburyport.  What a killer schedule!  They have just finished playing Ipswich, Pentucket, and now Masconomet.  Next game (Thursday) they host Ipswich in a league game.  Ipswich and Pentucket are undefeated.  Masco is a Division One team that gave both of those teams a run for their money before losing to them.

Molly Rowe (Bentley) and Joe Clancy (Merrimack) were in the house.

Masco’s next game will be hosting Amesbury on Wednesday night.

Finding information on Cape Ann League teams is a serious challenge.  One helpful site is www.calscores.com.  There you’ll find schedules, scores, and standings.

Details about teams can be very illusive.  However, that is no longer true regarding the Lady Chieftains.  Click on this link and see what I mean.

Rebecca Kell heads for the hoop